I mean, it is not like I am taking up yoga, or turning into Yoda or learning how to yodel. It is just that I was listening to a Christmas Carol channel… yes, that is a thing, when I encounter a version of “The Little Drummer Boy” sung by Bob Dylan, part of a Bob Dylan Christmas album. That guy has changed into whatever he has wanted to be, whenever he has wanted, and his transient gains or losses in popularity seemed to mean nothing to him. All I could think was, “Man, that dude is free”.

It was then that I realized I did not have to drink ten cups of coffee in the morning, I did not have to engage everyone who did not share my view of the world, I did not have to yell at the TV’s screen while watching FOX news, or show total disdain for every registered Democrat and most Republicans. No, nope, not at all. So I am sitting here typing away, a cup of green tea within my grasp, listening to Niel Young singing After The Gold Rush and enjoying the spirit of the holiday.

I like this time of year. The Christmas tree is up, the weather has been running from crisp to frigid, and my backlog of woodland whitetail hunting rifle projects is caught up. That gives me more latitude in picking projects of personal interest. Yeah for me! Today is a day reflecting opposite ends of the spectrum, a range day with a 300 Remington Ultra Mag and a FN 5.7x28mm.

The Remington Model 700 American Wilderness Rifle, while available in other chambers, is an optimal rifle for the 300 Remington Ultra Magnum. It is constructed from the right materials and finishes for a challenging weather and environment found on wilderness hunt, it has the right barrel length for the cartridge’s powder capacity, the AWR has the right heft and balance for steady sighting and recoil dissipation, and the proven Remington design to assure longevity in use.

A quick look inside

Bolt action rifles are relatively simple machines; easy to operate, easy to clean and maintain. The Remington Model 700 AWR is no exception. Overall, the Remington Model 700 AWR is push feed, a twin lug, long action with 90° bolt lift. A recessed bolt head holds a cartridge case head, the front portion of the bolt locates into a recess in the rifles barrel and the barrel shank is enclosed in the rifle’s receiver. Remington’s three rings of steel feature. The 26″ long barrel has 5R rifling to minimize the distortion effect rifling has on bullets. 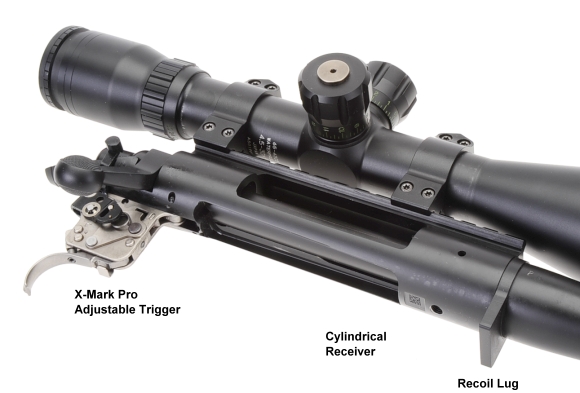 The classic Model 700 cylindrical receiver that is easy to bed to a stock in a production environment and with a high degree of accuracy. Both action and barrel are 416 stainless steel, and black Cerakote finished. As noted earlier, the action is secured to the stock through pillar bedding. Up from, the recoil lug drops into a recess in the stock and prevents rearward movement in relationship to the stock. The X-Mark Pro trigger is a good one; hardened surfaces, smooth trigger travel and no creep. The adjustment range is well within the confines of what is reasonable at 3 pounds to 5 pounds +/- a bit. 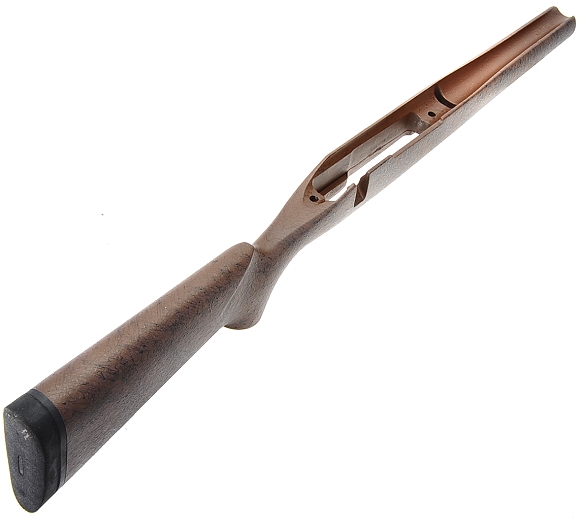 The Model 700 AWR Grayboe stock is moulded fiberglass construction. No embedded aluminum chassis, but pillar bedded with moulded in aluminum pillars. In fact, the stock is made from a solid homogeneous fiberglass epoxy matrix. no gel coat or foam core, making it easy to modify if desired, without impacting structure.  The stock is rear end capped with a shoulder friendly Decelerator recoil pad and fitted with swivel studs. As of late, a number of manufacturers have spray painted laminated wood stocks to look like composite stocks so I tend to look and make sure. 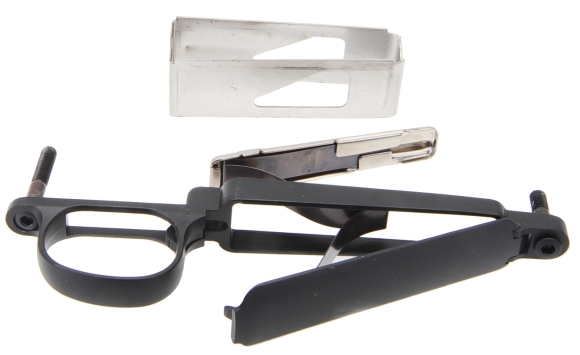 Bottom side, the trigger guard and hinged floorplate are made of aluminum and hard anodized matte black. The floorplate release is located at the inside, upper portion of the trigger guard. The follower is plated steel, as is the magazine box. The three round capacity is one round more than I had with my 378 WM based cases in my Weatherby Mark V rifles.

The 300 Remington Ultra Magnum is the fastest thirty in the visible universe!…!! 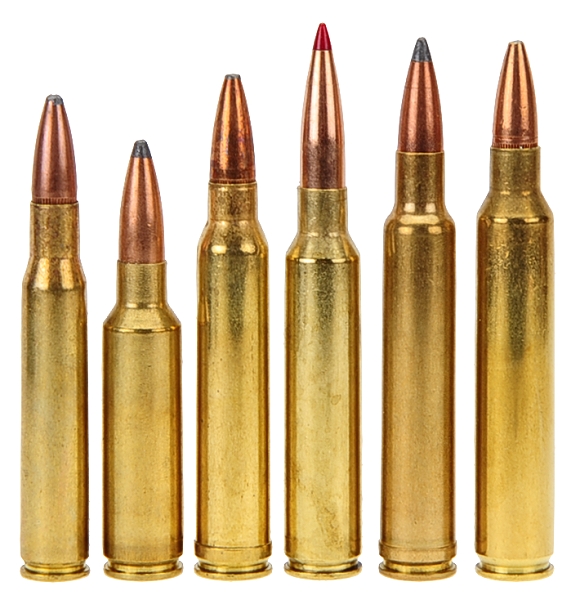 In the line up above, left to right, we begin with the 30-06 Springfield as the subject cartridge case capacity we want to increase to magnum proportions: 300 WSM, 300 Winchester Mag, 300 PRC based on the 375 Ruger case, 300 Weatherby Magnum, 300 Remington Ultra Magnum. Omitted are the smaller capacity 0.308″ caliber magnums and the larger 378 Weatherby case based magnums. The former because of its somewhat limited velocity potential and the later due to its oversize belt, body and rim causing a lack of firearm fit potential. As an example, the Remington Model 700 AWR in 300 Remington Ultra Mag is half the cost of a Weatherby Mark V 30-378. 300 Remington Ultra Magnum ammunition runs $40 – $50 per box of twenty rounds, where 30-378 Weatherby ammunition runs $100 – $120.

If this were 2000 to 2001, I would blame the receding popularity of the Ultra Mag product line on Winchester’s introduction of the Winchester Short Magnum cartridges. Winchester and members of the firearm press did a heck of a job convincing the market place that short squat cartridges, which provided little more velocity than their non-magnum first cousins, were the way to go.

If this were 2001 – 2002, I would blame the receding popularity of the Ultra Mag product line on Remington’s attempt to counter Winchester with their own line of anemic “magnums” in the form of the Short Action Ultra Mag series. Common, we know jumbo shrimp when we see it.

If you asked me today what diminished the success of the Remington Ultra Mag product, I would say, not a thing as the 300 Remington Ultra Magnum is highly successful, but now occupying an appropriate position in an application driven market place. If the 30-06 Springfield is enough cartridge for the largest game North America has to offer, the greater the increase in power above that level, the more narrow the application. How do firearm enthusiasts see these cartridge? Demand drives supply and this is how the .30 caliber cartridges fall in regard to supply…

With the 30-06 Springfield enough to get the job done on the largest North American game, there are essentially two reasons for progressing to ever larger capacity cartridges. Magnums can stretch shooting distances and magnums can drive heavier bullets. Combine increases in velocity with heavier bullets with higher ballistic coefficient and sectional density and the result is flatter shooting, higher retained velocity and higher retained energy. What might that look like? Running these through the Real Guns Ballistic Calculator with best zero selected by the program…

There are no magnum thunderbolts that push bullets twice the velocity of their standard cartridge affiliate. In this case, the 300 Remington Ultra Magnum outperformed the 30-06 Springfield from muzzle to termination at 500 yards where it generated 16% higher velocity at 500 yards and 32% higher kinetic energy. The velocity increase over the 30-06 Springfield reduces time in flight, therefore extending point blank and reducing drop at subsequent ranges, reducing wind drift and striking the target with greater momentum and kinetic energy for deeper penetration.

A couple of quick notes 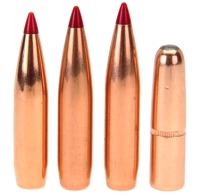 This isn’t the end of the story. I have owned three 300 Remington Ultra Magnum Rifles. One was a 26″ barrel Sendero, a 26″ barrel CDL and one 26″ barrel rifle I built in the shop from a Remington Model 700 Long Action that weighs 6.5 lbs… which I don’t like to talk about, at least not until I restock it. All of the SAAMI velocity ratings are predicated on a 24″ test barrel and the bigger the cartridge, the more they benefit from increases in barrel length.

The objective for Part II is to work up some handloads optimized for bullets on the heavy end of the weight spectrum. Be back soon with the handload portion of this project and notes on the rifle’s live fire performance.