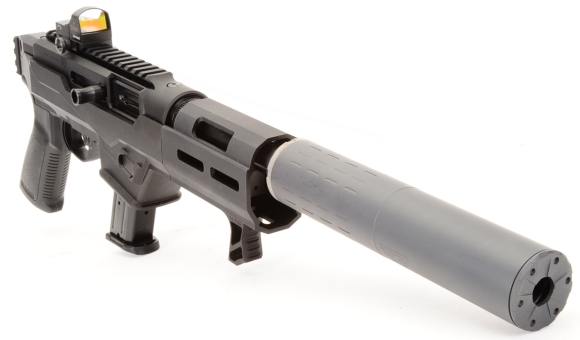 Being in the proximity of loud noises seems to have always been a component of my life; the din of manufacturing floors, the whine of large aircraft jet engines, race cars and motorcycles and, of course, the constant presence of firearms. Ten years ago, after realizing that my three most frequent responses to questions had become, “What?” or “Huh?” or “Could you repeat that?”, I began looking for better methods of protecting my hearing.

Some approaches to hearing protection were as basic as making sure I was wearing ear defenders and doubling up protection by also wearing ear plugs when shooting magnum cartridges. Another approach was utilizing a shooting fixture with remote triggering when possible. The biggest relief came with Real Guns adding a Class 03 SOT to its Type 07 FFL and subsequently purchasing a number of silencers for shop use.

Whenever silencers could be utilized, rifle or handgun, they quickly demonstrated value by providing a more comfortable shooting environment, by alleviating post range session headaches and by reducing phone calls from distant, agitated neighbors. Even local varmint control became a silent and efficient endeavor where the next in a sequence of prey was not warned off by a prior shot. Silencers came into almost constant use around the shop. In the process, I learned some things that have altered my perceptions of silencers and the people who use them in a major way.

Maxim’s 1908 patent application made no reference to the application potential of a silent firearm, just the intent of his device to silence a firearm by deflecting, redirecting, slowing, and eventually exhausting energy depleted powder gases as they exited the muzzle of a discharging firearm. Maxim did define silencer applications in the hundreds of ads the Maxim Silencer Company ran where shooters of hunting rifles and target rifles and handguns were the point of focus. A touch of a P.T. Barnum at times, Maxim claimed “Eliminates report entirely” in some ads, but mostly he claimed no more than a reduction in report, recoil and muzzle flash. 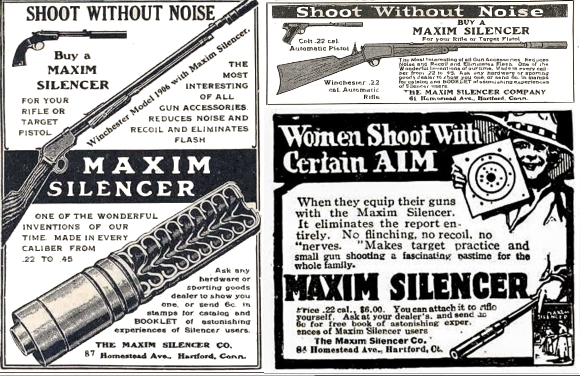 Silencers became quite popular in sporting applications, right up until the 1929 crash of the stock market triggered the Great Depression and the Dust Bowl helped to keep it going into 1933. With Americans standing in bread lines and unemployment rising to 25%, there was little demand for products that were not absolute necessities and silencer sales tanked. Coming out of the Depression, the sale of silencers was greeted with the National Firearms Act of 1934, which tightly restricted the sale of silencers and pushed Maxim away from firearm silencers and into automotive muffler manufacturing and sales.

How did we get to the NFA? During the Depression, the combination of human suffering and the continued prohibition of all alcoholic beverage proved a fertile environment for organized and not so organized crime. Bank robbers, bootleggers and smugglers facilitated their respective businesses with the use of machine guns, short barrel shotguns, silencers, etc.. Congress, ever prepared to exploit opportunities to circumvent the Constitution, was able to begin the trend of partial bans on firearms and associated equipment by coughing up the National Firearms Act of 1934. Silencers, along with other NFA material carried the stigma of criminal violence and Hollywood, with its obsession with violent movies, perpetuated the myth.

Remember when I wrote that there is no reference to applications in Maxim’s patent, only effect? Of course not, you were not paying attention. In any event, I suspect that is because Maxim understood that a silencer, like a firearm, is only a mechanical device and its purpose could only be defined by the human who put it to use. These days, with forty-two states allowing silencer ownership and forty permitting silencer use for hunting, the applications for silencers is getting back to the substance of Maxim’s early advertising in addition to their place in defensive and security environments. This could be attributed to the hard work of the industry and consumers who persist in educating and informing the public, pushing legislation to help us all have access to this these beneficial products.

Ten years ago, at the onset of my interest in silencers, I thought I was researching for a narrow story about security/defensive weapon gear… AKA yet more MSR toys. Most all of my time was dedicated to putting silencers on handguns and rifles and handloading subsonic ammunition, almost always with the objective of having a truly silent combination. It was probably the acceptance that semi automatic firearms make a mechanical racket, regardless how much report is reduced and mini sonic booms are avoided, and that bolt action noise can be reduced to the sound of a firing pin striking that I realized the breadth of silencer applications. Which begged the question, “What does this all mean to me?”.

I was not going to lead a special ops mission, so there was no team that had to hear audible commands over the sound of gunfire. As a relic, chances of being called to serve as a sniper with a need to suppress muzzle flash were slim to none. Moving with the speed of the mighty sloth, I could easily get by without quick attach capability for my range sessions. However, I do review lots of firearms, of varying types, in many calibers… constantly and the years have not diminished my fondness for hearing. What to do? What to do? A recent opportunity.

Circumstances and expectations, an example of a solution

Most of my silencers were originally listed by their manufacturers as caliber specific but, through a stroke of marketing genius, have since been relisted as multi caliber capable. Unfortunately, someone forgot to tell each respective silencer about their new found capabilities. As I tried to explain to one enthusiast who persisted in sending me marketing material that suggested the smallest 22 LR silencer could easily handle the 460 Weatherby, “Ah, no… no… and no some more”. There is a big difference between a specific silencer’s ability to structurally withstand muzzle pressure and pressure persistence, as opposed to managing the same and effectively and efficiently reduce noise levels.

In a world where centerfire 22 caliber rifles can generate 140 dB noise levels and bigger bore rifles can reach in excess of 175 dB, the first objective in hearing protection is getting noise levels below 140 dB. Exposure to noise levels above 140dB can cause permanent hearing damage even with only the briefest exposure.

My personal goal is to keep noise levels below 100 dB, the touchdown celebrating sound of a crowd at an NFL football game. Unless it is the NY Giants where the response is stunned silence. Even that celebratory level could cause a degree of permanent hearing loss if maintained for fifteen minutes. Again, not the NY Giants. Noise level increases and decreases are exponential, not linear. As an example, increasing from 10dB to 20dB results in a power increase of 100, so the noise reduction goals indicated are major in terms of preservation of hearing.

With all of the apps floating around for Android or iOS, you would think it would be easy to measure noise levels. Not the case. The best iPhone apps sign off at 130 dB which essentially miss all of the higher readings that endanger hearing. Sound measurement and correlation to human hearing is above over the counter equipment and over my head. However, there is a great deal of information out there for those who might be interested. Subsequently, references to dB within the context of this exercise are all manufacturer sourced data.

SilencerCo’s Hybrid 46 and a systems approach

SilencerCo has been in business since 2008 and is located in West Valley City, UT. Currently, within their line up are four silencers for pistols, five for rifles, two for rimfires, and one for shotguns. In support of those products, they offer in aggregate a wide selection of: direct mounts, quick attach/detach mounts, Nielson device pistons, a selection of front caps, flash hiders, brakes, and threaded pistol barrels.

Minimum barrel length for any given cartridge is determined muzzle pressure and case/bore capacity and SilencerCo provides a guide to remove the guesswork in selection. Full auto fire and big cartridge short barrel approval, with noise levels below 140dB, indicates seriously robust construction.

The Hybrid 46 is constructed of durable Titanium and stainless steel. With exterior dimensions of 7.80″ x 1.57″ and a weight of 17.3 Oz it is relatively compact for a silencer that can handle the manufacturer approved cartridge range. The Hybrid is available in a number of finish colors: Sniper Grey: SU1532, Black: SU2271, White: SU2642, and FDE: SU2641. Sniper gray pictured. 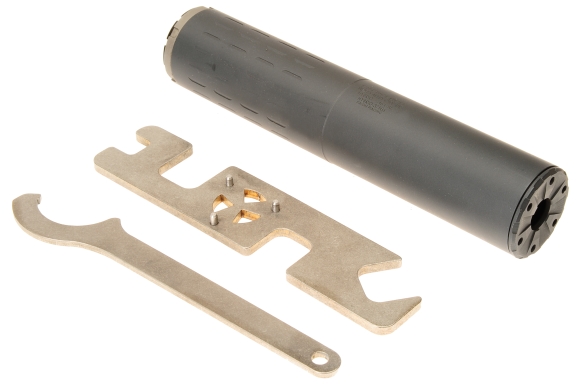 The Hybrid 46 is supplied with: 0.46″ aperture front cap, rear Bravo piston housing with the spring and piston retainer, 5/8×24 Bravo direct thread mount, Bravo multi tool, Bravo basic wrench, and a comprehensive product field manual. To fit the Hybrid 46 to all of the rifles listed for review required three interchangeable direct mount: 11/16×24, 5/8×24, 1/2×28 as pictured below. 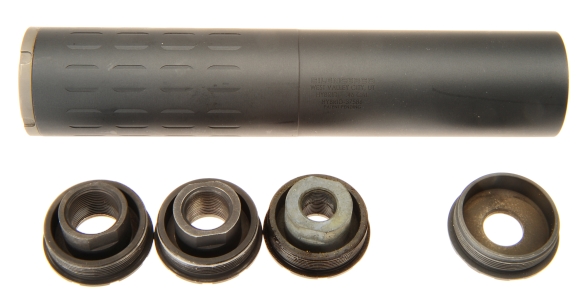 The included front cap has a 0.460″ aperture. Also available are 5.56mm and 7.62mm. Keeping the front cap closer to caliber size can additionally reduce noise levels by as much as 25 dB. Front caps also carry an MSRP of $110 and are discounted at retail outlets by a similar amount. I ran all of my projects with the 0.460″ front cap in place and still experienced a major reduction in noise levels.

The Hybrid 46 has an MSRP of $999 in kit form as previously defined but, like the mounts and front caps, they are available through retail outlets at considerably lower prices. For the duration of the long list of project firearms, reviews and associated handloading projects, the rest of my silencers sat idle. One Hybrid 46 silencer and two accessory mounts replaced multiple silencers of another type and only a single $200 tax payment was incurred.

At 7.8″ x 1.57″ and weighing 17.3 Oz, the SilencerCo Hybrid 46 is compact compared to other products with this much cartridge range capacity. Most important, it does what I needed to get done; suppress noise across a wide variety of firearms to a major degree. I burned through a good deal of ammunition in an outdoor range setting with the Hybrid 46 in place. Once I found that neither accuracy or velocity were impaired, there was no reason to remove it, other than to move it to the next firearm on the schedule.

A 7.62 NATO with a 150 grain soft point bullet, 43.5 grain charge of IMR 3031, and an 18″ barrel has a muzzle pressure of approximately 12,000 PSI. Extend the barrel to 22″, keeping all else the same, and pressure drops to a tick over 9,000 PSI and dB falls with it. Change the powder to 42.5 grains of AR-Comp and muzzle pressure drops to under 11,000 PSI for the 18″ barrel and a tick over 8,000 PSI for the 22″ barrel, another drop in dB. Change from a bolt action to a AR platform and dB changes again. My only point is that absolute numbers are not realistic, but the relative change from a not suppressed to suppressed is major, in any event.

What does this all mean In a range setting, with all three pieces of ear protection in place? Hours of shooting without a headache, without loss of target focus and without the physical stress that accompanies the nerve grating of constant, excessively loud noise. While hunting, where shooting is infrequent, I could forgo the ear plugs and ear protectors and shoot with only the Hybrid 46 in place, without damaging my hearing or scaring the wildlife into the next county.

The SilencerCo Hybrid 46 is a very nice product, very well made and a big plus for any shooter. 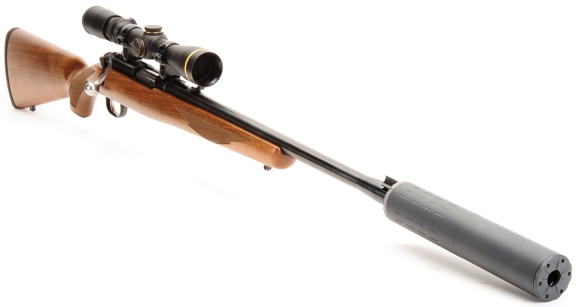