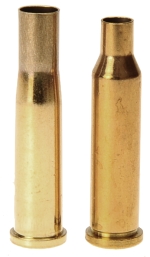 The provenance of the 17 Hornet is often credited to P.O. Ackley, dating back to the early 1950s. However, Ackley states in his 1959 book, “Handbook For Shooters and Reloaders” that other versions predated his .17 Ackley Hornet . Shooters handloading those early cartridges were challenged by a lack of quality .17 caliber bullets and a lack of quality .17 caliber barrels. Neither challenge exists today.

The 17 Hornets, version aside, are generally considered 200 yard, small varmint cartridges. They are especially suited to geographic areas of dense population where noise and danger of ricochets make them naturals. They are easy and inexpensive to handload, easy on barrels and rifles are typically quite accurate.

Background of an arcane and recondite nature

The Ruger 77/XX’s origins go back to the Ruger 77/22, a dedicated 22 LR rimfire design. Thanks to the persistent efforts of Ruger’s Jay Jarvis, and his desire for the new rifle to accommodate the longer 22 Winchester Magnum cartridge, the rifle’s design incorporated a number of adaptable elements.

The 77/ series receiver can be cast in varying lengths. Paired with breech blocks of various length, the 77/ Series can accommodate different length and diameter cartridges. All models within the 77/ series share a common size bolt handle, with forward twin lugs that engage the rear receiver ring. Magazine length and capacity vary for the same purpose.

The receiver for the 44 Magnum is 1/2″ longer than the 22 rimfire version. Prior to November 2009, 22 LR, 22 WMR and 17 HMR rifle barrels were slip fit to the receiver and secured with a V block. Barrels for all other chambers, and all production since, are threaded to the receiver.

Real Guns has covered this combination in significant detail previously, available as:

Joe, I am in my house, on lock down and growing highly impatient. Is this story going anywhere? Sure, isn’t it always? I mean, I may not know exactly where at this point, but it is definitely going somewhere. Something we won’t be doing.

The focus of this effort is to improve the accuracy of the combination, with a minimal outlay of cash and labor. Why? Because it seems too many people buy a firearm and accept whatever it delivers from the factory; see term, “It is, what it is” and amend to add, “Only if you are what you are”. Deep, man. Anyway… The approach taken, and results that follow, pertain to this rifle alone. Different rifles respond to different approaches and even one specimen within a product type will often respond differently than another. Think of this as a suggested alternative to buying a new rifle, getting less than exciting results a local range, then making a bee line to social media to bitch and post a thumbs down rating and being unhappy with your purchase.

So I shot some groups and began to poke around… 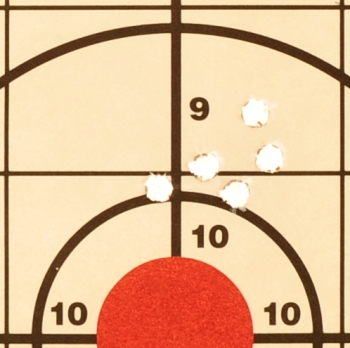 My approach was to set up the scope, then shoot my groups of varying loads and bullet weights, withholding further adjustment. This allowed me to gather group size data and measuring shifts in point of impact. The five shot group pictured measures 11/16″, center to center, most distant holes.

Ten additional five shot groups varied in size between 11/16″ and 1″. In highly technical jargon, I classified this Ruger Model 77/17 as a 11/16″ – 1″ shooter with Hornady Superformance 20 grain V-Max ammunition.

I would handload first, get groups as small as possible, and then shoot factory ammo to confirm the improvement was due to handloads and not the bore/barrel becoming seasoned and settled. With a new baseline, I could then go on and make mechanical changes to the rifle.

The objective is to get .17 caliber, 20 grain Hornady V-Max bullets to shoot smaller than 1/2″, 5 shot groups at 100 yards. What is the scientific basis that led to that criteria for improvement? The 1/2″ five shot group is small enough for critical hits on small game and varmints. Why Hornady and Nosler bullets in these weights? Because I have an ample supply of brass and thousands of these tiny bullets and other necessary components. Why now? I am also on lock down, but fortunately with a shooting range out back and access to the shop.

This is a fun project; easy on the ears, easy on the gear and easy on the wallet. Yes, I also can feel the electricity of anticipation in the air… like the sounds of a giant bug zapper. Yes, I did borrow that imagery from Phil Collins. Yes, he is an old timer. No, I do not find myself wondering what happened to Crockett and Tubbs. Can we just change the subject?

The following is an initial run… 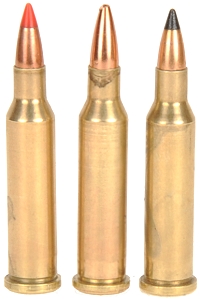 CFE BLK seemed to yield the highest and most consistent velocity. Nothing wrong with the others, however, Lil’ Gun was a little… frisky and tended to run warm with max loads. More work will be done with H322 at a later date as it seemed to offer potential for wider use.

Once fired case capacity, H2O spill over full, measured 14 grains, full length sizing reduced this to 12.8 grains. New brass capacity measured 13.4. No need to rush to neck resize for capacity as only one charge listed came close to being labeled compressed, H322.

Bullets were screened for weight uniformity, but all and all they were quite consistent. As an example, out of a sample size of 50 Hornady 20 grain V-Max bullets, only three did not weight 20.1 grains. Two of the three weighted 20.0 grains on the dot and one weighed 19.9 grains. The three were removed from supply, but all were within scale tolerance.

Nothing special in the process other than breaking out the teeny-tiny funnel, case mouth reamer, trimmer pilots, shell holders and cleaning rod. Seating bullets requires a light and controlled touch to avoid flat base bullets from crunching case necks. Ask me how I know.

It took an hour to remember which cabinet was home to a macro lens, but I knew it would be easier to show with pictures rather than trying to write a narrative and illustrate with shadow hands and sock puppets. 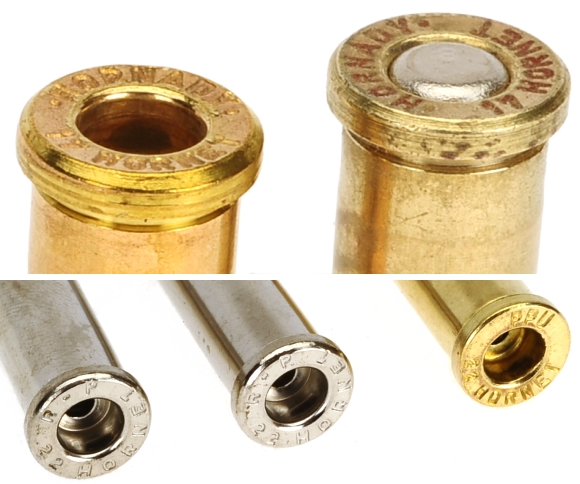 Under the title “Just because it is different doesn’t mean it’s bad”, 17 Hornet brass, new component brass and factory assembled ammunition had cupped, concave rim faces – above, top images. A response from Hornady indicated this was a byproduct of primer pocket and flash hole forming a case with a very small and hard to support rim. More than the concave surface, the rim bevel and rim thickness on component brass was uneven. The concern was that there were not two planner, parallel faces under discharge pressure between rim and bolt face which may adversely influence accuracy or precision repeatability. If you want to shoot 17 Hornet firearms, today the only source is Hornady.

Examining 22 Hornet brass (Above – lower image), they share a common casehead, I found no common deformity. The Remington brass was flat, but the edge was chamfered rather than beveled and a PPU brass had a very uniform rim and a flat surface. Some of the Remington brass had an off center rim while the primer flash hole was on bore centerline.

Under the heading of handy tools – The Hornet rim, 22 or 17, is small and edge beveled, but a can seam micrometer… or what my wife calls a “meter doohickey, can grab reference surfaces appropriately and consistently for cross point checks. A fixture still needs to be set up that will allow measurement of rim face runout to see if the brass is uniformly supported against the rifle’s bolt face. The recorded measurement will be present in the next installment. Why am I droning on about the rim? Well, the Hornet headspaces on the rim and the next piece to this project is checking the influence of headspace, altering headspace and checking headspace with a headspace gauge.

In conclusion, “The sky is falling! The sky is falling!”. Actually, I have no idea if the deformation of the Hornet case has any influence at all on rifle accuracy. I may make 17 Hornet brass out of select flat rim 22 Hornet brass. I could then accuracy compare the results to other collected data. Not sure, as making 22 Hornet brass is a pain in the butt. No you can’t just run 22 Hornet brass through a 17 Hornet size die. Done correctly, there are two steps required for necking down the case and an inside cutter or drill is required to recover proper wall thickness. Cases must be fire formed to get the correct shoulder position and angle and annealing the finished case and trimming is a good idea. See, I am tired already.

Conclusions and what the heck is on the end of that barrel!!…! 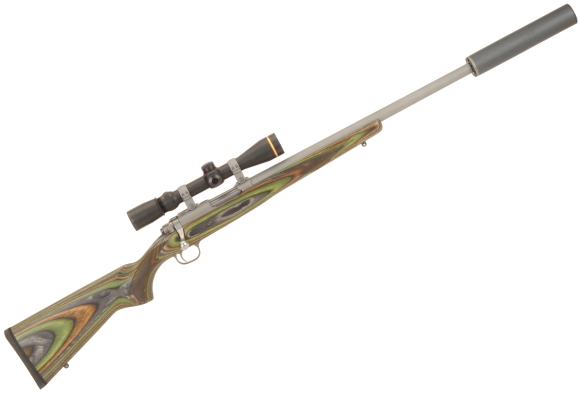 Yes, I did omit the specific change in accuracy; precision for those who believe the NRA is the authority on firearm terminology. I want to place them on a summary table for context and comparison and I want to shoot more and collect more data. The SilencerCo Hybrid 46 has become my new best friend as it has been on everything with a threaded muzzle, pistols, bolt action rifle and AR types shooting both standard and magnum cartridge up to .458 caliber. Certainly make work easier, protects hearing and relationships with distant neighbors. One silencer, four fixed mounts and everything is covered. Be back shortly with the final on this project.