What follows is a what I enjoy about firearms. Once I wrote a piece on making modified cartridge for a Hornady COL gauge on a lathe with a drill and tap. One of the comments posted was, “Why would anyone waste time to make one, when they can buy one for $10?”. This article is not written for anyone who would ask that question. Me? Grumpy? A few more days of coronavirus lock down and I suspect my wife will put both me and a sleeping bag in the garage.

Headspace measurement is the dimension between a chamber surface that prevents forward movement of a cartridge and a firearm’s breech face when a firearm is in battery. The specification for this dimension, in most cases, is determined by SAAMI and/or CIP. The surface preventing forward movement is typically that which comes in contact with a cartridge shoulder, a cartridge case belt or a cartridge rim. The 17 Hornet, by SAAMI specification, headspaces on its rim. While there are a number of approaches and tools for checking and/or measuring headspace, it is usually done with a series of precision gauges labeled Go, No-Go and Field. 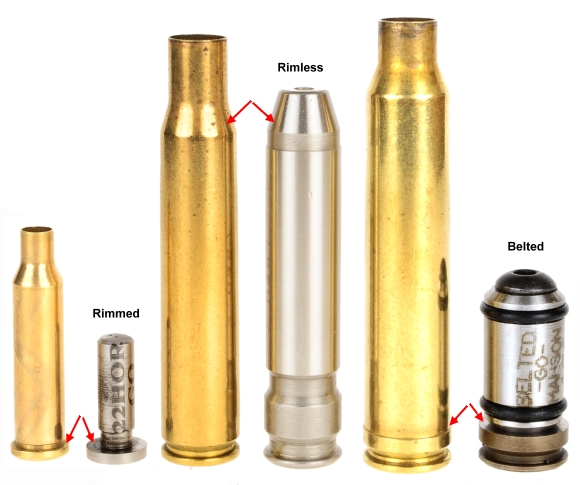 Examples of headspace Go gauges for L-R: 17 Hornet rim, 30-06 Springfield shoulder, 7mm Remington Magnum belted. Because of the reference points used to measure headspace, the 17 Hornet and 22 Hornet utilize the same gauge. The 30-06 Springfield gauge can be used for the 25-06 Rem, 270 Win, 280 Rem, and 35 Whelen. The 7mm Rem Mag gauge can be used for any belted magnum based on the 375 H&H parent case. 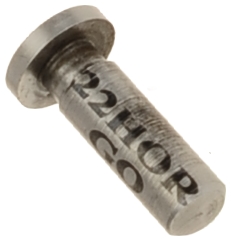 The SAAMI minimum – maximum headspace specification for the 17 Hornet is 0.065″ – 0.720″. This is the space between the face of a barrel tenon and a breech face. The Go gauge pictured has a 0.065″ rim, coincidentally the same as the Hornady factory ammunition rims used for testing.

Ruger tends to run minimum size chambers, which is a good thing. Minimum chambers typically result in the best accuracy because they promote the least dimensional change to cartridge brass on discharge, they provide the greatest chamber pressure seal and they provide the most case head support.

Excessive headspace, in addition to not affording the benefits of minimum headspace, cause excessive brass stretching under pressure, which shortens brass life and may cause brass to fracture at the top of the case head above the web. Brass is no more than a gasket that seals a firearm’s chamber and breech face and it requires the backing of the surrounding steel to maintain its integrity. Only 10,000 – 12,000 PSI of chamber pressure is required to make brass conform to chamber walls and breech face. Without steel backing, not  much more pressure would be required to rupture brass casings. 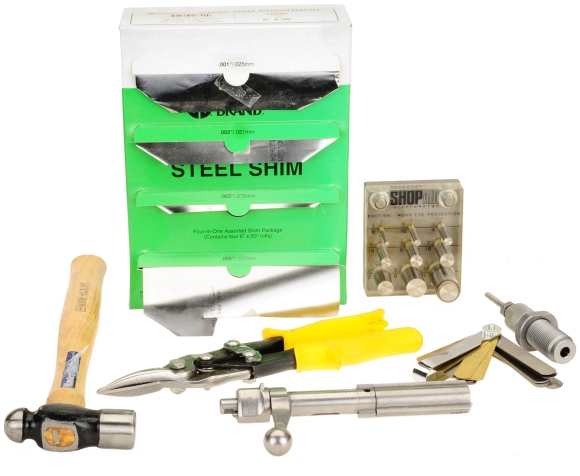 Before investing time and effort in setting minimum headspace, it is probably worth a quick check to see if potential for improvement exists. Personally, I have not found a Ruger 77/17 out of min or max headspace, but I have found some at 0.068″ – 0.070″ that could be reduced to 0.065″ for minimum headspace. 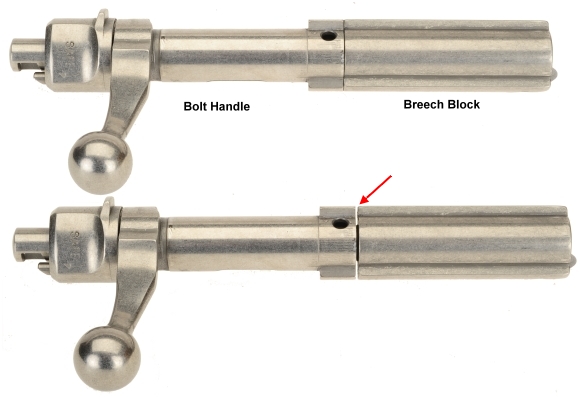 As pictured above, the breech block on all Ruger 77/XX rifle will move back and forth in relation to the bolt handle while out of the rifle, but that is not of consequence. What is important is how large of a gap exists with a rifle in battery and a Go gauge inserted in its chamber.The picture below was taken with the bolt removed for the sake of illustration, but the actual reading is taken with the bolt installed in the rifle. 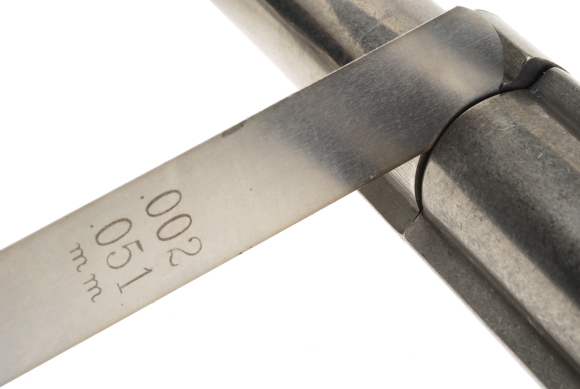 With magazine removed and chamber checked for empty, and a Go gauge in place, the bolt is pushed forward just short of full stroke. An oiled feeler gauge is inserted between the bolt handle and breech block and an attempt is made to close the bolt with the feeler gauge in place. The starting gauge thickness is 0.002″ because anything smaller would offer no opportunity for improvement. The breech block guide rails, and pressure against the bolt face, keep the bolt handle and breech block on the same longitudinal centerline and prevent cocking from pressure against the feeler gauge. With a gap larger than 0.002″, reduction of headspace is useful.

A popular accuracy refinement for all Ruger 77/XX rifles is shimming the bolt between bolt handle and breech block to establish minimum headspace. Shims can be made with shim stock, shears and shim stock punches or with a Pepe Tools disc cutter with centering tools. TriggerShims offers a less costly and less labor intensive solution.

I started using steel shims as part of trigger jobs on revolvers. Improvements resulting from careful shaping, stoning and polishing engagement surfaces were compromised by the influence of excessive hammer and trigger side play. TriggerShims offers a wide variety of inexpensive precision shim stock washers that center hammers and triggers and limit lateral movement and they also makes washers to reduce headspace on Ruger 77/XX rifles. 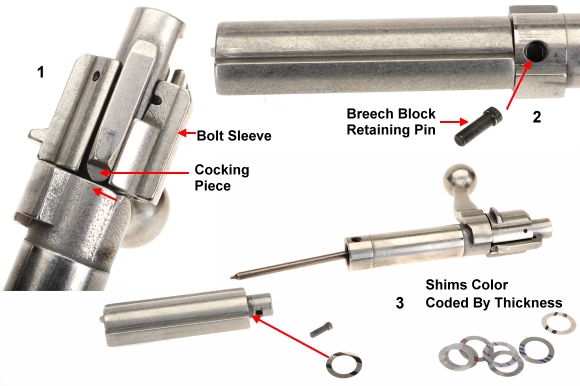 In abbreviated form, detailed instructions come with the shims: rotate bolt sleeve and cocking piece clockwise out of detent. This will allow the breech block to over rotate and release the captive retaining pin. The breech block can be separated from the bolt body. A shim is installed and, starting with 0.002″ thickness, the bolt is reassembled. With the headspace gauge in place, the bolt is inserted into the rifle and an attempt is made to rotate the bolt into battery. If battery is achieved, the bolt is removed and additional combinations of shims are tried until the bolt goes into battery with a snug fit. 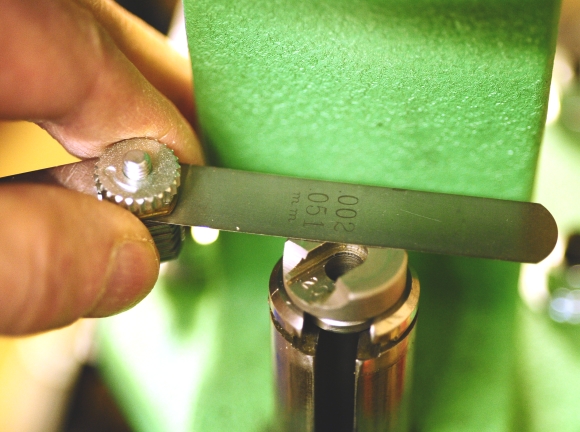 Another way for handloaders to reduce free space between a cartridge case head and a breech face is to adjust a full length sizer die to allow the shoulders of a fired case to locate farther forward, which moves the casehead rearward toward the breech face. In the case of the Ruger 77/17, the measurement taken from the gap between bolt handle and breech block can be transferred to the sizer die adjustment.

Where typical adjustment of the sizer dies would be done by raising the ram and screwing the dies down until it is against the shell holder, in this case a feeler gauge of bolt gap thickness is place between the shell holder and the nose of the die before running the die down toward the shell plate. Because this extends more of the case head aft of the chamber, headspace is minimized but there is less case head support from the chamber and the cartridge will now headspace on the shoulder rather than the rim. Adjustments of this type should not exceed SAAMI maximum headspace dimensions.

In the absence of a greater than minimum headspace measurement to carry over, minimal headspace can be set by trial and error by beginning with a 0.002″ thickness feeler gauge placed between the sizer die and shell holder and sizing a once fired case. If the rifle’s bolt closes easily with a Go gauge in place, increase feeler gauge thickness in increments of 0.001″ and continuing the sequence until the bolt will not close. Then back up 0.001″ so the bolt will close and lock the sizer die adjustment.

In the case of the subject Ruger 77/17, headspace was tight as received. So a shim washer was die cut from 0.001″ shim stock and honed flat on a wet stone and inserted between the bolt’s bolt handle and breech block for 0.066″ of headspace. Using baseline handloads, the difference in five shot group size was not substantial enough nor consistent enough to claim a benefit. On a different example of the Ruger 77/17, with a headspace of 0.070″ from barrel tenon face to bolt face, group sizes were reduced consistently by 0.2″ when headspace was reduced to 0.065″.

What did make a difference in the subject Ruger 77/17

The fasteners that secure the stock to the action were torqued different levels with no appreciable effect. The barrel channel was shimmed to make contact with the barrel at different points and for varying spans which only increased 100 yard, 5 shot group sizes. So everything was restored to factory configurations and handloads were addressed.

The Ruger 77/XX products are unique in design and in performance, whether chambered for a .17 caliber varmint cartridge or a woodland deer hunting 357 mag or 44 mag. They are compact, relatively light and accurate. They do respond to tweaking, which makes them even more enjoyable for the handloader. At a time when many rifles are an exercise in corporate cost reduction and jellybean production, I’m glad they are around.