The Model 1885 was invented by John M. Browning in 1878 and patented in 1879 as a generic Browning Brothers single shot rifle. Approximately six hundred rifles were produced by the Browning Brothers of Ogden, Utah Territory between 1880 and 1883, before the manufacturing and sales rights were sold to Winchester and it became the Winchester Model 1885.

Chambered for cartridges from the .22 Short to the .50-90 Sharps, and a limited number in 20 gauge, the Model 1885 was produced in low and high wall versions and as sporters, carbines, muskets, and Schützen rifles. Between 1885 and 1920, approximately 140,000 units of all types of Model 1885s were manufactured.

Under the current Browning – Winchester business structure, the Model 1885 was placed back into production, in varying degrees, since 1985. While availability of specific configurations and calibers change with production runs, the current Winchester line up is:

The Winchester Model 1885 Traditional Hunter Deluxe in 38-55 shares features and traits with other Model 1885s and a number that are unique. A common trait? Sure. Opening any Winchester Model 1885 is like a opening a thoughtful birthday gift. Nice shipping carton, rifle well wrapped and protected and a detailed, high quality manual. They are always absent of handling imperfections that seem to plague many other manufacturers’ products.

In the case of the subject Traditional Hunter Deluxe, the bluing was flawless, as was the chemical case hardened receiver, lever and buttplate. The black walnut had a good deal of color and contrast, nice touches of figure, and cleanly cut checkering. The crescent buttplate makes for accurate shooting and its lack of resilience was not an issue with the 38-55 WCF. The folding tang sight was a useful touch, especially when taking advantage of the 28″ barrel’s long sight radius and potential for longer distance shooting. 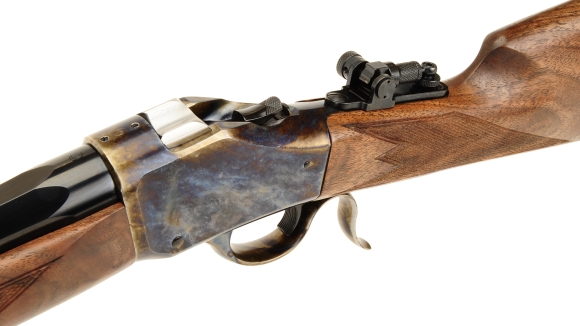 Below – The Winchester Model 1885 Traditional Hunter Deluxe provides a number of sighting systems to accommodate a wide range of shooters and applications. The folding tang mounted peep sight has a 0.055″ aperture, which is good for target shooting and most hunting situations. With the disc removed, the sight’s aperture measured 0.160″ and has Marble Arms standard threads. This allows use of a variety of aftermarket disc aperture sizes.The peep sight adjustment, elevation and windage, is in 1/2 MOA increments.

The selective shell deflector located in the hammer well is handy. With the tab centered, empties are caught and held for hand removal. Turned right or left, empties eject opposite of the tab position selected. The Model 1885 is drilled and tapped 6-48 for traditional scope mounts, two on the receiver’s front ring and two on the barrel just aft of the rear open sight. No, not a historical travesty as even the original 1885 had long legs and benefited from the use of a scope. 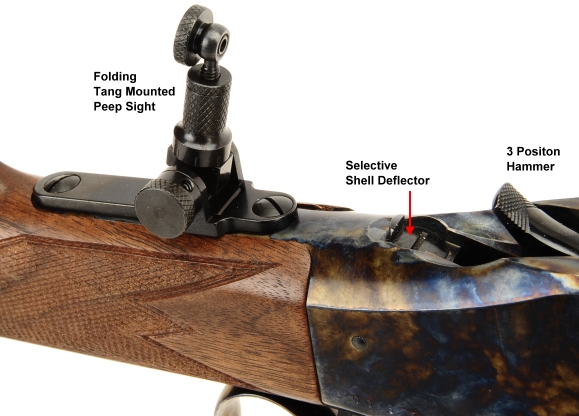 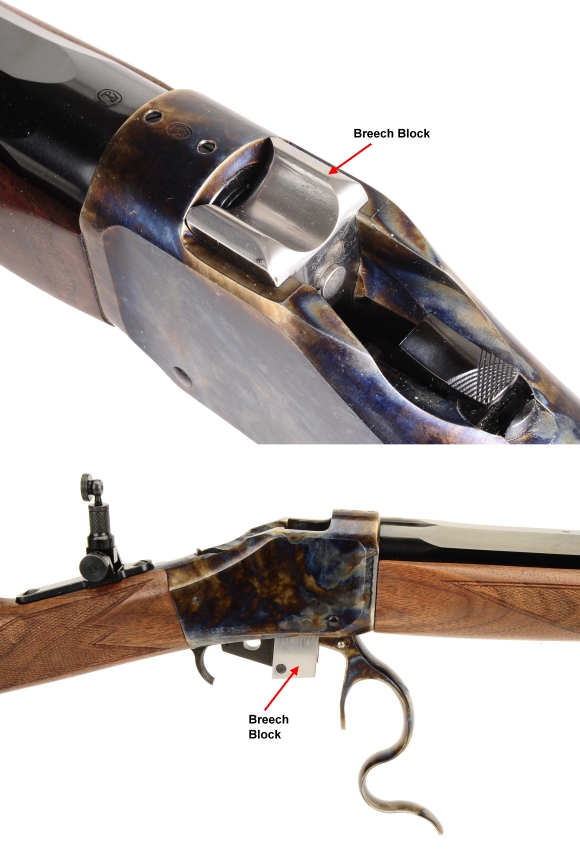 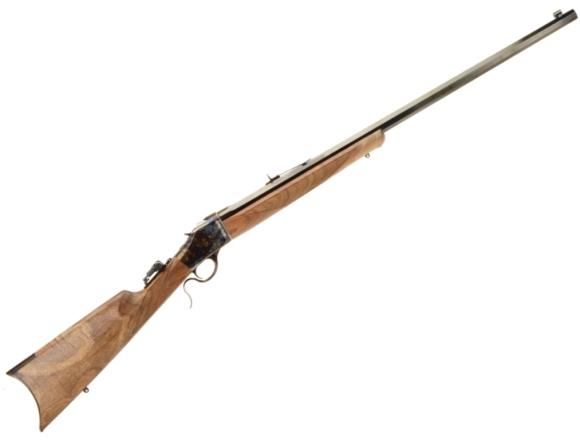 As would be suspected, the long hex barrel makes the rifle a bit nose heavy, but not by much. For me, I found the bit of weight on the muzzle to be steadying. Combined with the long sight radius. the rifle can comfortably shot accurately even from a standing position. 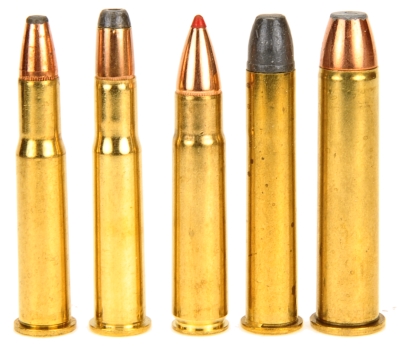 For the handloader, any level of performance indicated here can be matched or bettered and at a significantly lower cost. Plus, bullet weights from 200 grains to 300 grains, with appropriate jacket thickness and cannelure placement are readily available. 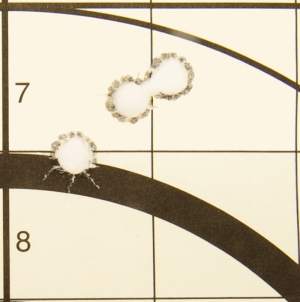 Out of the box and not sighted in, the target on the left was shot with the first three Black Hills Ammunition 255 grain cast bullets down the rifle’s barrel; 1″ grid. It was shot with the precision V notch in the rifle’s semi-buckhorn rear sight and post mounted brass bead front sight. Yes, the rifle was securely rested, but aimed with my eyes and my bifocals and an orange smudge of a bullseye 100 yards out. Amazing what a long sight radius and a well made rifle can achieve.

The Winchester Model 1885 Traditional Hunter Deluxe seems appropriate for a geezers collective day. One of those nice warm days, when the air is clear, the 200 yard range is open and you are one upping the 65 year old kid in the group.

The Winchester Model 1885 Traditional Hunter Deluxe reminds me of bitter cold hunting days in South Dakota, taking a successful 300 yard shot at a prairie deer and watching it drop where it stood. It reminds me of a rifle I would not mind cleaning after an outing or showing off to friends. It leaves me with the good feeling that quality traditional rifles are still being made.