05/11/2020 – Sometimes my wife allows me to assist in putting lunch together. Today was one of those days; tuna sandwiches. Diet whole wheat bread, two cans of white albacore chunk packed in water, two large tablespoons of Hellman’s mayonnaise,  chopped celery, chopped green onion, a dash of black ground pepper, topped with sliced vine tomatoes. It my surprise you to know I knew none of this prior to making sandwiches.

My wife is a master trainer. So specific and so thorough in explaining, process and ingredients, yet so subtle in delivery she had me believing I knew what I was doing. As an example I might ask, “How many scallions should I use?”. Answer, “What I do is grab a bunch, wash them under cold running water, chop off the root end and wilted shoots, quarter them, then I run them through the chopper… the small chopper”.  But that’s just me. You know what you’re doing”.

Fifty years ago, I could flip that around and just keep asking her questions until she demonstrated each step, which ended with her making the sandwich that I would eat. In the world of lunches, that was the best three months of my life.

The Ruger Mini Thirty in context

Within the history of Ruger firearms, the 1991 Mini Thirty was the most recent release within a series of firearms that originated with the Mini-14. So let’s hit the reverse button, go to an imaginary lapse dissolve and address the Mini-14. The 1971 prototype Mini-14 began life as a modified M14 design, scaled down proportional to a change in cartridge from the M14’s 308 Winchester to the Mini-14’s 223 Remington. Production began in 1975.

Ruger’s objective with the Mini-14 was to foster military and law enforcement sales. That strategy further played out in the 1986 – 1999 Ruger AC556 submachine gun with its three position selector switch: semiautomatic, three shot burst and full auto. The AC556 was offered in fixed stock, folding stock and short barrel versions, all with a 750 RPM rate of fire.

In 1982, the Ruger Ranch rifle was introduced, a revised Mini-14, available in 222 Remington and 223 Remington,  with features added to accommodate telescopic sights. The top of the rifle’s receiver was cross slotted and side scalloped to accept Ruger proprietary rings. A back up folding peep sight served back up duty.

A buffer system was added to absorb the shock of the slide block, again, to protect a mounted scope. The Ranch Rifle also dropped the spring loaded ejector from the bolt, moving the function to an extended bolt stop. This change resulted in the rifle side ejecting empties away from a mounted scope.

In the mid 1980s, Ruger attempted to proportionally scale up the Mini-14 to accommodate the 308 Winchester cartridge in the form of the Ruger XGI. Unfortunately, solving problems associated with a sharp increase is reciprocating mass and first shot inaccuracy would have  driven the product’s potential retail price well above competing products. Few rifles were produced and it was never a production rifle.

The 1991 Mini – Thirty was created to expand Ruger export sales. While many export destinations were invested in the 223 Rem cartridge, there was another large portion of export potential into areas where the 7.62x39mm was more common.

Fortunately, the U.S. is also cognizant of the 7.62x39mm cartridge and its capabilities and availability of inexpensive ammo. The Min-14 branched into the Mini Thirty and a solid deer hunting combination was created. While the subject configuration does not accommodate a silencer, other Mini Thirty configurations do. Besides the 7.62x39mm’s medium game hunting capabilities, it is also an excellent cartridge for subsonic handloading and suppressed applications.

A little misdirection, followed by a refocus

I decided not to do a takedown detail approach here, as we have done several detailed articles previously. The links below represent a five part series that addresses Mini-Thirty modifications from a trigger job to adjustable gas system and restocking in walnut. If you have an interest in this type of information, I suggest the following reading:

Setting aside the tactical and defensive applications for the Mini-Thirty, I thought we might look at the Mini-Thirty within the context of hunting hog, deer and similar size game. The Ruger Mini-Thirty is a light, compact and fast handling little carbine that fits into woodland hunting as much as any lever guns. Yes, that does include your 30-30 WCF as power generated is very similar. 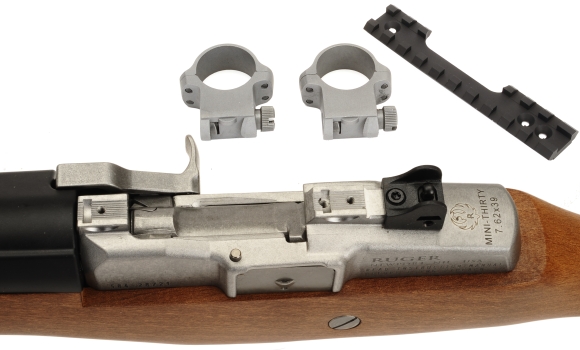 The subject and current Ruger Mini-Thirty offers versatility. Ruger scope rings and rail are included with the rifle so virtually any type of optical sight can be installed. Don’t like things hanging off of a hunting rifle when shorter range shooting is the rule? The rear ghost sight and front brush guarded blade make for a good metallic sight set up. 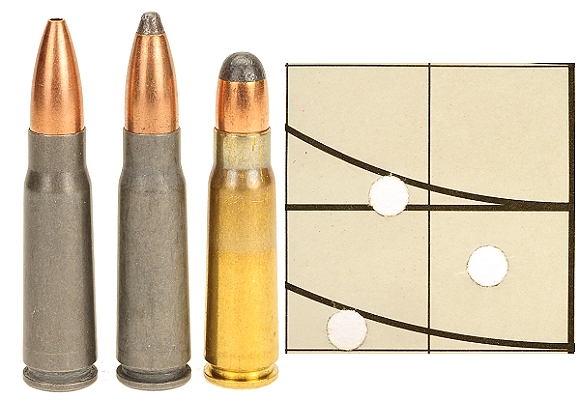 Three shot, 1 1/8″ 100 yard group, shot through the ghost sight set up. Ammunition was inexpensive PPU 123 grain SPRN. I’m thinking the Mini-Thirty has come a long way. It once too a good deal of work to deliver this level of accuracy. Most of the time, working down from 2″ to 3″ groups. Three types of ammunition were utilized: L-R steel case, Berdan primed Herter’s 122 grain hollow point, Herter’s 154 grain soft point, PPU 123 grain RNSP. Chronograph velocity, respectively, was 2,505 fps, 2,189 fps, 2,479 fps. More on accuracy and velocity performance in Part II with handloads.

Primers… Do the British call them pimmers?

“The Mini-14 Ranch and Mini Thirty Rifles are designed to use either standardized U.S. military, or factory loaded sporting cartridges manufactured in accordance with U.S. industry practice. Always be careful to ensure you are using the correct ammunition for your rifle. See “Ammunition Notice” & “Warning – Ammunition,”  USE ONLY FACTORY AMMUNITION LOADED TO U.S. INDUSTRY STANDARDS”.

The problem is not the steel case. We have U.S. steel case ammo production; Winchester U.S.A. Forged as an example. However, Winchester ammo utilized boxer type primers. Hornady Steel Match Ammo is assembled by Hornady, but the cases are Russian made and the ammunition is Berdan primed. Both steel case products are poly coated.

Setting aside the issue of polymer coated steel case fouling chambers, Berdan primers require a more forceful strike for ignition and deeper firing pin penetration. The Mini-Thirty has to straddle the line of firing pin force and penetration so that it can provide reliable ignition without over penetrating and piercing Boxer primers. During range sessions, there were no misfires with Boxer primed ammo. There was one of 40 misfires with Berdan primed, steel case ammo.

For anyone who wants to shoot Berdan primed ammunition as a steady diet – The easiest way to clean up the occasional failure to fire with this lumpy ammo is to change to a higher rate hammer spring. Wolff Springs sells a +20% extra power hammer spring SKU #30351 Mini-14/30 Hammer Spring. Both Wolff and Ruger springs are the same length and outside diameter. However, the spring material is 0.0695″ in diameter, up from the stock spring’s 0.0650″.

Personally, I do not use steel cased ammo in anything. Brass forms and reforms many times without failing and conforms to chamber walls with even modest pressure. Steel work hardens quickly, does not conform well to chamber walls and it gunks up dies with its polymer coating. For me, putting cheap steel ammo in a quality gun is like putting low octane gas in a high performance car; you could, but why?

A note on magazines… the kind that still exist 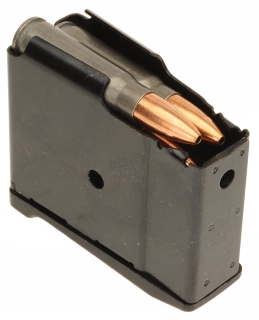 The subject Mini-Thirty configuration is supplied with two, five round, flush fitting magazines. Steel and poly construction, they are positively latched into position, but insert and release cleanly. Both ten and twenty round magazines are available as after sale accessories at Shop Ruger.

The 7.62×39 has a SAAMI cartridge minimum – maximum cartridge overall length of 2.150″ to 2.200″. The Ruger magazine provides an additional 0.100″ over maximum cartridge specification to assure reliable feed. The magazines are easy to load and feed without a hiccup.

SAAMI specification for the 7.62×39 is 0.3110″ +0.000/-0.0020. The Ruger Mini-Thirty groove diameter is 0.3105″ and bore diameter is 0.3080″. The intention is to work up handloads closer to groove specification, with an emphasis on bullets suitable for hunting. Subsequently, magazine maximum length became of consequence.

The plan was to expand bullet weight range over most handloading manuals, and to try for some optimal supersonic and subsonic loads that will run reliably through the Mini-Thirty. Maybe there will be a gem or two in the data, or maybe not. We’ll see. Bullets listed for the 7.62x39mm are limited in selection and almost always measure 0.310″. 303 British bullets are listed with 0.311″ bullets, which is within diameter spec for the 7.62x39mm. All 303 British bullets below measured 0.3105″. 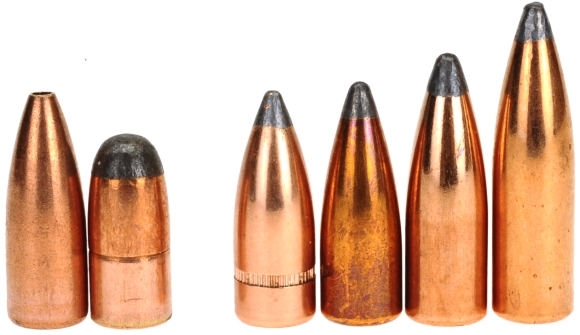 Below – The caliper was zeroed on opposing flats of the Sinclair Comparator, each bullet was then dropped into the “30” position of the gauge and then a measurement was taken from opposite flat to bullet heel. The result is the length from the bullet’s heel to the onset of the ogive; the span available to locate the case mouth when seating. 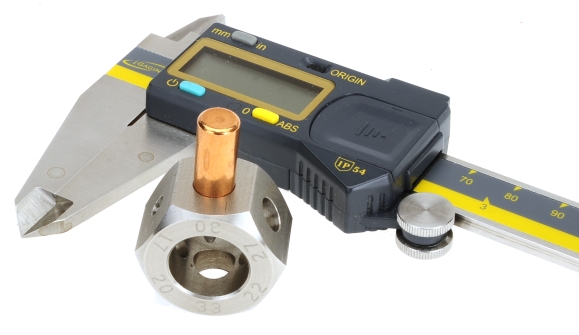 How does a .30 caliber gauge work to locate shank to ogive transition on a 0.3105″ bullet? The Sinclair comparator holes are machined to chamber throat diameter, however, .30 caliber throats vary in spec from 0.3085″ to 0.3150″ depending on cartridge and chamber drawing. Checking with pin gauges, the hole diameter measured 0.309″ and entrance chamfer measured 0.310″. So I took the measurement, adjusting the recorded protruding bullet length downward by 0.005″ to add a margin of certainty, and called it done.

A consideration was, “Will these expand at 7.62×39 velocity”. Both the Hornady 123 grain and Sierra 125 grain are listed for the 7.62x39mm and designed for medium size game… deer, hogs.The 7.62x39mm is included in Sierra’s listing for the 180 grain Pro Hunter, where it is defined as a deep penetrating bullet. I bet. Speer lists the 150 grain Hot-Cor bullet for 303 British reduced loads at 1966 fps, so I will reserve suitability until th 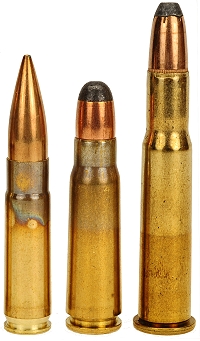 ere is some chronograph data to review.

Part I wrap up…

The Ruger Mini-14 is available in 300 BLK, far left, the Mini-Thirty in 7.62x39mm center. As a supersonic round, the 7.62x39mm has greater potential, approaching the performance level of the 30-30 WCF round (pictured right).

In overview – Yes, I did bounce around while writing. Probably because I started with a review format, decided I’ve done that several times in the past, but wondered if today’s Ruger Mini-Thirty offered enhanced performance over earlier production. I was impressed by its accuracy, its fit and finish and quality of materials. Trigger pull is a tad heavy. Easy enough to fix, but it would be nice to see a factory pull below 5 pounds.