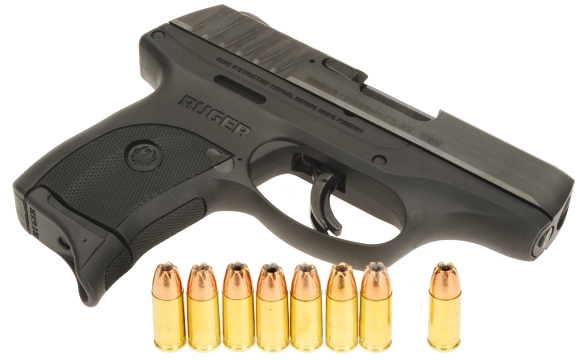 One of the positive aspects of winters in Maine is the necessity for clothing that could conceal a bazooka. What is a bazooka? If you are old enough to remember movies set in World War II / Korean War era, it was that 55″ long tube shouldered by a kneeling gunner and rear end fed a 2.36″ diameter rocket by a loader. Clear of the path of the exhaust, the loader would tap the gunner on the shoulder, a rocket plume would flame from the back and a tank within 300 yards would erupt into a pile of scrap steel and exploding ammo.

According to movies of the day, the “Launcher, Rocket, 2.36 inch, Anti-Tank, M-1” was just as effective on: a Rhedosaurus* (Beast From 20,000 Fathoms 1953), giant ants (Them! 1954), mutant spiders (World Without End 1956), and a giant Ymir (20 Million Miles to Earth 1957). What does this have to do with the Ruger EC9s? Nothing at all. I was trying to illustrate how winter clothing makes concealing even large weapons easy but, metaphorically speaking, I ran off the road and into a ditch while reminiscing. 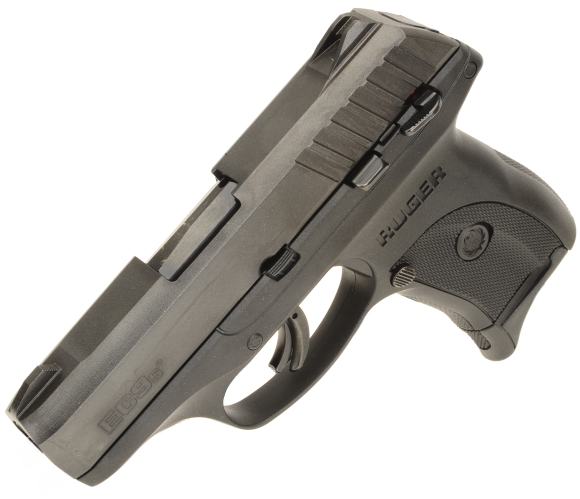 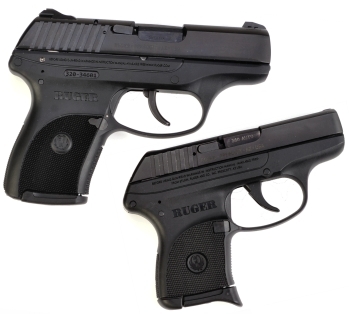 The Ruger EC9s lineage began with the January 2011 introduction of the LC9. The LC9, followed on the heels of the very popular LCP compact 380 Auto that was introduced in February 2008. The LC9 provided greater lethality in a slightly larger package as pictured, left.

Where the LCP is a striker design, the LC9 is a preset hammer design where the trigger pull finished cocking the hammer before release.

In July 2014, the LC9 was overhauled and became the LC9s, a striker fired design with a much improved trigger with the same external form. The “s” signifies striker. Later that same year, a Pro version sans thumb safety and magazine disconnect was introduced.

In mid 2018, the Ruger EC9s was introduced, a cost reduced version of the LC9s; fixed sights, fewer process steps and what is often described as a black oxide substitute for the LC9s’s blued finish. While both finishes are actually the same, the underlying metal finish is different. In Ruger vernacular, if the metal has been polished prior to the black oxide process, it is defined as “blued”. If the metal surface has been bead blasted prior to the black oxide process the finish is defined as “black oxide”.

When introduced, the EC9s was listed with an MSRP $100 less than the LC9s. As detailed above, some of the cost reduction came from a reduction in finishing steps, some from reducing machining steps like decreasing slide serration count, going to integral fixed sights, packaging one magazine with the product. A little here and a little there that added up to a significant drop in price without any sacrifice to quality or performance.

The Ruger EC9s is a simple, but solidly engineered and manufactured pistol. Where many compact pistols can be… finicky in operation, the EC9s had no such propensity. Regardless ammunition fed: factory, handloads, FMJ, hollow points, lightweight composite, and cast, the EC9s fed, fired and cycled without complaint. The poly grip frame is durable, a durable hard anodized aluminum insert provides strength and wear resistance for all friction points and precision fire control part alignment. 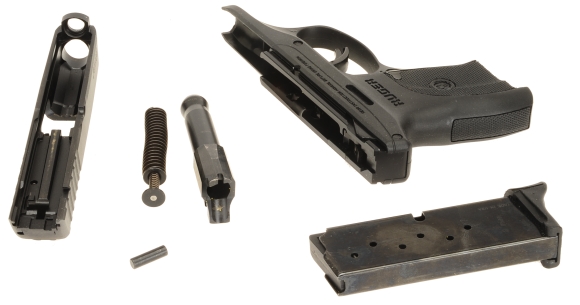 Takedown, is easy. I will leave the safe details of how the pistol is disassembled to the Ruger manual, but central to the exercise is a takedown plate is pushed down, the takedown pin is pushed out and the slide assembly is pushed forward on the frame and off. The guide rod assembly and barrel life out of the slide.

The EC9s slide is a through hardened, CNC machined precision casting. The sights are machined integrally with the slide. Sight faces are serrated to kill glare. The extractor is oversized compared to most 9mm compact pistols. The relatively wide spacing of ribs on gripping surfaces provide excellent purchase.

A notable characteristic of the EC9s is an easy to rack slide. The guide rod assembly, Ruger nomenclature, is spring is two stage. The rear spring provides little resistance until the slide is well into its rearward travel. The dampening is effective as the EC9s is a relatively soft shooting compact 9mm. 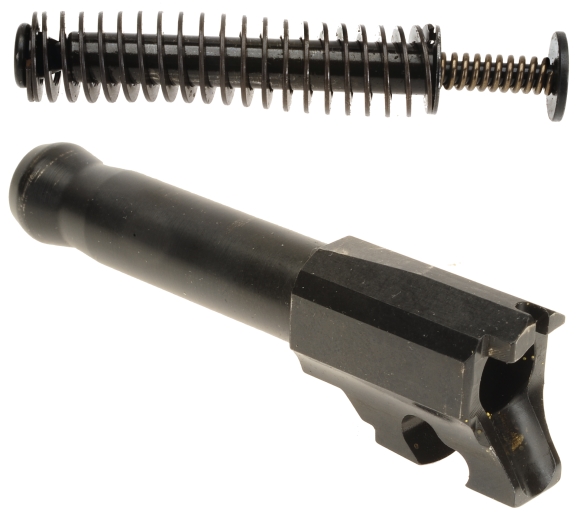 The alloy steel barrel is bushingless and ramped to assure reliable feed. The barrel hood has a view port to permit cursory empty/loaded chamber status. Cursory, as it does not replace the process for assuring an empty chamber where the pistol is pointed in a safe direction with fingers outside the trigger guard, the magazine is removed, the slide is retracted to eject a chambered round, and the chamber is visually inspected for empty. 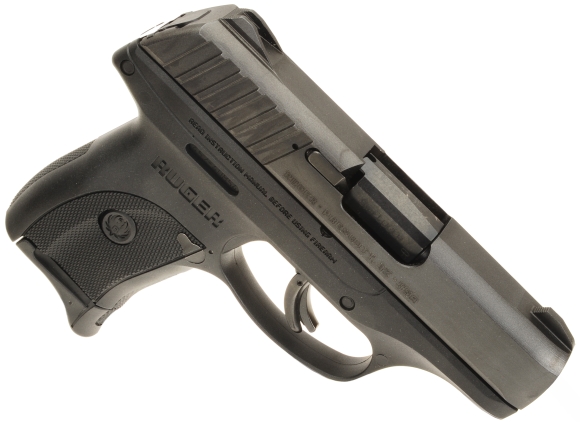 There are some people who are anti safety. No, I don’t know why, although I have heard their tales of millisecond saves when they did not have to thumb down a safety or could still shoot with a magazine out, or they fell into a dumpster during a shootout and could only pull the trigger on their pistola with their elbow; thank God there was no embedded trigger safety!

Personally, I think for 99.99% of the shooting public, the no safety mentality is a load of crap. Most people in a defensive situation are not highly honed assassins where spit second delays mean lives, or where having to remember to switch a safety to “fire” should not represent unreasonable mental or training challenges. The EC9s requires that you take the gun off of safe, you have your finger on the trigger and a magazine in place. I don’t think that is asking to much in the way of personal handgun proficiency. 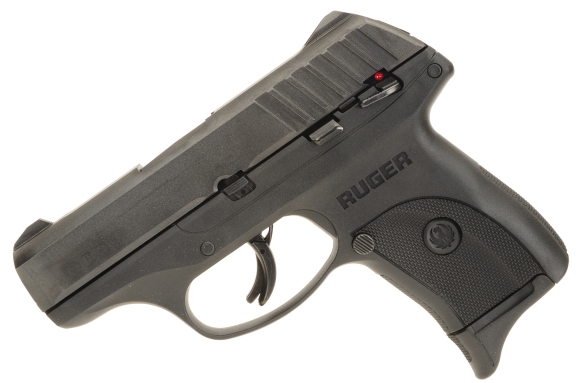 The control layout is intuitive; above the trigger and just below the slide is the takedown plate that secures the takedown pin. Moving right, the slide stop and farther aft is the thumb safety. The thumb safety has positive detent positions that allow the safety top be thumbed off, but more direct force is required to go to safe. Although it has been a lot of years since I won a thumb wrestling contest, so maybe that is just me. 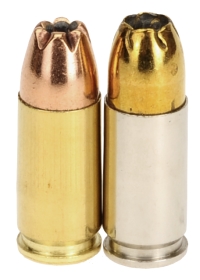 The Ruger EC9s is approved for any NATO, U.S., SAAMI, or CIP standard ammunition, brass or aluminum cased. It is also sort of approved for +P, with the caution it can be used but it will accelerate wear.

The Ruger is not approved in any way for ammunition labeled as +P+, ++P+, or the dreaded dark star +++P+!!+ , or any of the other labels manufacturers use on ammunition that is loaded above recommended safe pressure levels. Shrug it off if you will, but I still have all of my fingers and toes and I am as good looking as always. Hey, my wife tells me that all of the time… just before asking me to take out the trash, mow the lawn, build a new garage… the usual.

Why these two? Because after many target shooting, and gel penetration tests, and popping varmints, and running firearm reliability and longevity assessment, and researching manufacturer’s recommendations, I’ve found these two to be readily available and not too pricey. Neither has the science fiction look of the current rash of $3 per round cartridges that are tipped with what looks like an EZout, but they fully expand without fragmenting at the recorded velocity levels.

Five shots into an office B27.0006 10 yard target. Yes, it does look like a common 2.5″ x 3.5″, but it is actually a very hard to find, special target that I personally make in the basement. If you are interested, they are $37.50 per; expensive but highly tactical and very pro grade. 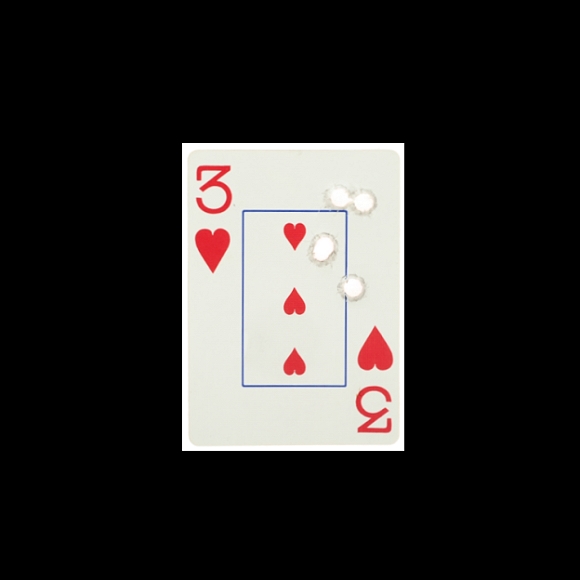 Surrounding the playing card is a 6.5″ square which, to me, represents the critical chest area. Sure, there is an infinite number of opinions depending on which expert is selling a seminar or training day, so I picked this one for myself and to use when assessing firearm and shooting for proficiency. Both IMI and Remington ammo shot about the same, however, there was a 1″ left to right change in point of impact.

Why is a conclusion necessary? Well, since I come from the rambling school of righting and because I write from point to point of distraction, it is always good to pull things together at the end.

With the heat of summer coming, bringing with it the loss of big bulky carcass covering clothes, compact firearms offer the most choices for concealment. The Ruger EC9s brings that small form, but in 9mm Luger, so lethality isn’t materially compromised by the downsize. The pistol is comfortable to shoot, shoots accurately and with a high degree of reliability. Incredible price for a well made in U.S.A. pistol.

No, please don’t shoot this way. Let’s leave that for Hollywood nitwits.

*In cooperation with a radio active grenade