It is a Jackson Browne kind of day. The rain finally subsided, leaving behind rich, wet emerald green Maine. The lawn is overgrown, tree branches are reaching far out from the tree line for the sun, and wildlife has returned to view. Deer grazing on clover, fox snacking on chipmunks, wild turkey gobbling up fallen, immature crab apples, coyotes waiting for nightfall to return to their marauding ways. If it were not for the politicians attempting to win favor with their big city counterparts, we would be living in Eden, Maine. I guess we will enjoy it for as long as we can.

Broke out the clearing saw and machete and cleared the range and headed out with the S&W Model 57 41 Mag, some factory ammunition and a couple of trays of handloads. I hate to disturb the wildlife, but they have grown accustom to my presence and they will return soon after the shooting stops. Eden. 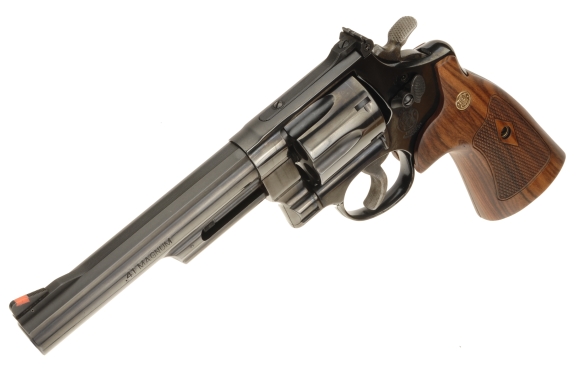 The Smith & Wesson Model 57 Classic has been previously reviewed on Real Guns, with a presentation of: specs, history, evolution, and performance.

What brought the Model 57 back, besides just the fun of doing a related project, was the thought that the handloads published in the original work left something on the table. There were not enough light loads and the heavy bullet end of the spectrum was… lackluster. For background on the combination, both revolver and cartridge, I suggested reading the original set as linked above.

I do not know why factory ammunition choices are so restricted. From the large manufacturers, performance ammunition comes typically in 180 grain or 210 grain bullet weights. The more specialized brands add 230 grain, 250 grain and 265 grain loads. I don’t know why, as the 41 Magnum is an excellent handgun hunting and those heavy bullet loads are bone breakers.

Ammo prices vary from reasonable to nuts. Reasonable is a dollar a round and there is a good selection being sold through discount retail. Federal is way overpriced for what is essentially mediocre ammunition at twice the price of other major brands; $2/round. Buffalo Bore once was my favorite, but I guess they are targeting people who have to have something and don’t care how much they pay for it; $4/round and nothing a handloader couldn’t accomplish for $.40/round, or 1/10th the cost. 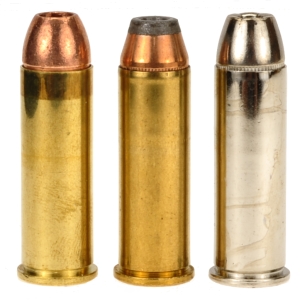 The SAAMI reference barrel for .41 Rem Mag chambered handguns is 5.788″ +- 0.010″ and vented with an 0.008″ gap to reflect revolver applications. The SAAMI test barrel length is 10″ and not vented. Unfortunately, manufacturers don’t seem to hold to either of these standards, instead using anywhere from 4″ to 10″ to set ammunition ratings.

I am not sure why Federal applies such a low velocity rating, in line with a 5.788″ test barrel, the actual velocity read over a calibrated chronograph is much closer in alignment with the 10″ non-vented test barrel standard velocity. Over time, I have found that this particular label tends to run that way for other calibers as well. I will stick a pin in that for further correlation and research.

The ammunition listed above is suitable for handgun hunting; deer, hogs and black bear, particularly inside fifty yards. Is it a concealed carry, defensive round, the revolver on the night stand? I do not think so. It was originally introduced as a round for law enforcement; more powerful than the 357 Magnum, but not as hard to manage as a 44 Mag.

However, shot placement and shooter control are typically the issue more than the need for more power beyond a 357 Mag. So the factory ammo police load was 210 grains at 1,150 fps with an 8 3/4″ barrel and approximately 1,000 fps from a 6″ barrel. By comparison, the full tilt hunting load when the Model 57 was released as 210 grain jacketed hollow point bullet at 1,360 or 1,400 fps. Sounds like the saga of the Bren Ten that turned into the 40 S&W.

In the words of Hall & Oates “Do What You Want, Be What You Are”

Factory ammo… good stuff… shoot it if you got it… Okay, are they gone now? Good. I really like to handload my own ammo and I only buy factory ammo as a last resort. For some reason, 210 grains is the de facto heavyweight in most mainstream reloading manuals, but the 41 Rem Mag is capable of so much more. The heavier, hard cast bullets work with penetration rather than expansion; break bones, reach vitals, particularly when the shooting distance is near the outer reach of a firearm. 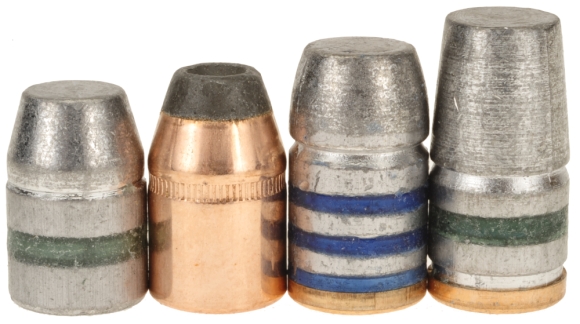 In this case, I decided to start with a middle weight that could pack a punch, but also work light loaded for target practice and plinking, or perhaps used on smaller game where hole punching rather than expansion is desired. The Nosler was my one offering to the gods of norms, then quickly moved on to heavier weights and really heavy .41 caliber bullets, the latter two that can blow through 32+ inches of ballistic gel and more than a couple birch trees.

Of the bullets listed, the True Shot results in significantly longer than SAAMI Maximum cartridge overall length. Maximum spec COL is 1.590″, where the assembled cartridge with True Shot bullet is 1.170″. Yikes! How is that going to work? Well, where the S&W cylinder is 1.672″ long, it only must accept the case body and bullet as the 0.053″ rim bits reside to the rear and outside of the cylinder. The length from cylinder face to recoil shield is 1.750″. Long story… long, there is a margin of approximately 0.040″ between bullet tip and cylinder face.

The chamber throats at the face of the cylinder measure 0.410″, 0.001″ – 0.002″ smaller than bullet diameter, however, the bullet ogive is conical and does not come in contact with the throat when loading rounds into chambers. Additionally, a Lee Factory Crimp Die put a grab on the bullet that did not allow bullets pulling under recoil, even when leaving a couple in the cylinder and letting them go for a ride while the others were filled and fired several times.

Full length resized, lightly mouth flared, bullet seated and then crimped. Four dies, no special attention needed. The load data was developed using CCI large pistol magnum primers because of the density of the powder charges and the powder selected. I also did not want to manage two primer types on the bench. Remember, not a primer substitute to someone else’s data. Magnum primers were selected at the onset and then loads developed.

I am not trying to set velocity records with handloads, but more in search of good velocity with accuracy. Keep in mind, 6″ barrel. The initial three loads were loaded soft and they are the most pleasant to shoot. Loud pop and easy to control. Next three restored 41 Magnum performance, as did those that follow.

These were all shot from a cast iron rest with support from shot filled leather bags so as to minimize my influence. I know the 41 mag is supposed to be halfway between a 357 Mag and a 44 Mag, but I’d say more like three quarters toward the 44 Mag at these levels. The revolver has the mechanical accuracy, but it takes practice to manage recoil and focus, particularly for extended shooting sessions.

The Model 57 is a big N frame with a target barrel. Just under 48 ounces empty, the heft and hand filling grips are appropriate for its 41 magnum power, as is the half inch wide hammer and serrated trigger face. After some long days of shooting, I still looked forward to shooting.

The top surface is laid out and finished well. Lots of striations on flat surfaces to kill glare and the red insert provides good contrast on target. The Model 57 can be scoped, but within the range of the 41 Mag, not essential and it would ruin the revolver’s easy handling and compact hunter’s carry. 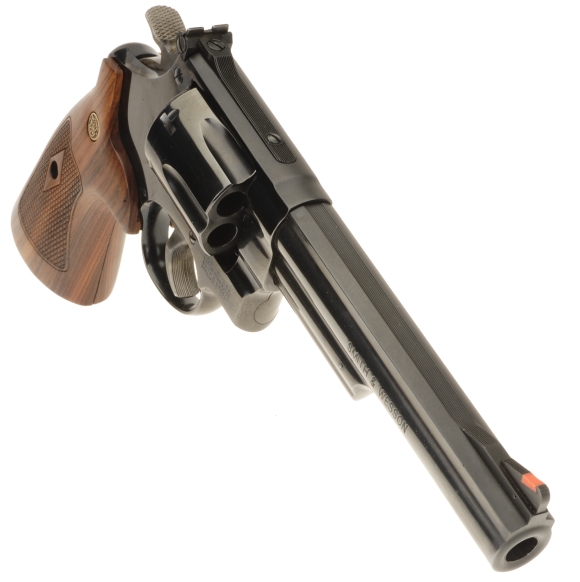 Accurate. reliable, well made, and nicely finished. And not a bad looking carry. Smith & Wesson Model 57 in 41 Rem mag. Glad these Classic series guns are still with us. 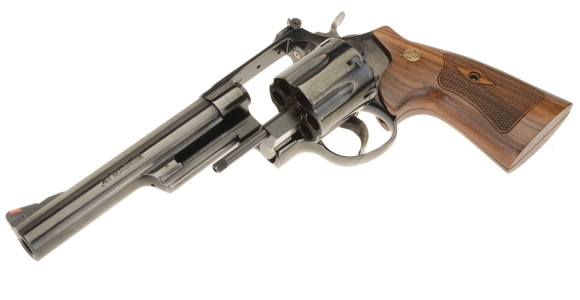