The Ruger Hawkeye Hunter and the 6.5 PRC Greater 6.5 power, without the barrel burn out thing...

Between 1869 and 1870, Vingt mille lieues sous les mers was published in serialized form in the French periodical Magasin d’Éducation et de Récréation. In 1872, a compilation in the form of a novel was published in English as Jules Verne’s 20,000 Leagues Under the Sea. The story is written as a first person narrative, through the character Professor Pierre Aronnax, a French marine biologist.

The feel of the story is quite like Herman Melville’s novel Moby Dick, also narrated in first person by the character Ishmael, but published in 1851. Both novels open to a search for what is believed to be a monstrous whale; Verne with Captain Nemo, Melville with Captain Ahab. The details of the journeys are different, but the conclusions in the long strokes are quite the same.  And movie versions have ruined both stories in each studio’s effort to reduce them to a child’s tale or a political puppet show.

What always keeps me engaged in 20,000 Leagues Under The Sea is the title. Verne was a futurist, an expansive thinker and a very descriptive writer of great specificity. A league is 3.452 miles. 20,000 leagues is 69,040 miles. In 240 BC, a Greek named Eratosthenes determined the earth to be 29,000 miles in diameter, which was later refined to 24,900 miles at the bulging waistline at the equator. Was Verne’s 20,000 leagues a metaphor for the expansiveness of the unknown, or was he just uninformed? I know. Keeps me awake at night too.

What is the point of my Nautilus V. Moby intensely analytical dissertation? I think that is obvious. Neither Verne or Melville incorporated the Ruger Hawkeye Hunter, or the 6.5 PRC, into their novels. Coincidence? Maybe. Maybe not.

Yes, PRC is an acronym for Precision Rifle Cartridge… 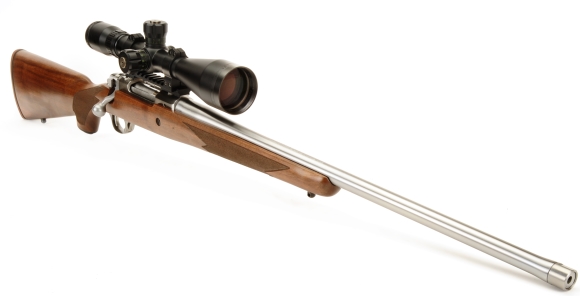 I like this Ruger company; firearms based on century plus proven designs with refinements, modern materials, precise manufacturing processes and aesthetically pleasing. The result is durability, reliability and excellent accuracy.

While the subject rifle is a 6.5 PR, the Ruger Hawkeye Hunter is also available in: 204 Ruger, 6.5 Creedmoor, 7mm Rem Mag, 308 Win, 30-06 Springfield, and 300 Win Mag. The Creedmoor and Win Mag are available also in left hand configurations.

The 6.5 PRC was previously covered on Real Guns in depth and in detail previously, including handload data, in the form of The Hawkeye Long Range Target 6.5 PRC Part I and Part II . However, the Long Range Target model carries considerably more weight and its barrel is 4″ longer. The Hunter would seem the model with greater hunting applications.

The Ruger Hawkeye Hunter and Long Range Target differ in numerous other ways. The Long Range, appropriately for its intended application, is four pounds heavier. Its stock is comb adjustable to accommodate various target shooting positions. The heavy contour barrel and receiver are fashioned from alloy steel. The Long Range has a two stage adjustable trigger.

The Hawkeye Hunter has a slender and with geometry appropriate for a scoped hunting rifle. It is a comfortable stock shooting from standing, kneeling, sitting, and prone positions. However, at my age, assuming the sitting position should only be attempted when you are in no hurry to stand up again, and never in the presence of anyone who thinks a little push to the shoulder would provide great entertainment.

The Ruger comes with swivel studs and very cleanly checkered gripping surfaces. The forearm is narrow, but deep enough in profile to be hand filling.

The pull length is comfortable at 13.5″. Shorter than some, but handy when the weather is cold and more than a t-shirt and jeans are worn. The comb is high at 3/4″ below bore centerline and a 1″ drop at the heel.  The scope is sitting high in even in low 30mm rings, but that is how I set up when primarily shooting from a bench is planned.

The light sporter contour Hawkeye Hunter’s barrel is flared behind the muzzle threads. This allows maximum thread size to mount a muzzle device like a brake or a silencer, while providing adequate shoulder surface for secure device backing. In this case, the device was a SilencerCo Hybrid 46. Muzzle pressure with the 6.5 PRC is well within the range of other cartridges listed with the silencer. The barrel is hammer forged and features a tight twist 5R rifling.

The Hunter has a three position safety to either lock the bolt closed or to facilitate safe bolt cycling to unload the rifle. The Hunter also has a hinged floor plate for easy and safe unloading.

The Hunter is supplied with a 20 MOA offset rail that is secured with four, #8-40 screws for increased long-range elevation capabilities.Why the big hardware? Under recoil, the rifle moves rearward… quickly. The scope wants to remain where it is. For the long range shooter with big optics made my Celestron, the larger rail mounting fasteners won’t shear when stressed.

Shooting at longer distances, 600+ yards, most scopes on standard rails would run out of upward elevation adjustment. The 20 MOA rail is canted down at the front, which elevates the rifle’s muzzle relative to a scope’s optical center line. So, at 600+ yards where it is needed, a scope will have an additional 20 MOA of adjustment.

But what if you hunt in Maine, or many other locations, where the bragging long shot is 125 yards and you don’t want your rifle’s muzzle at launch inclination? Easy, you remove the rail and use the proprietary Ruger mount system where the rings are secured directly to scallops and cross slots milled into the receiver. 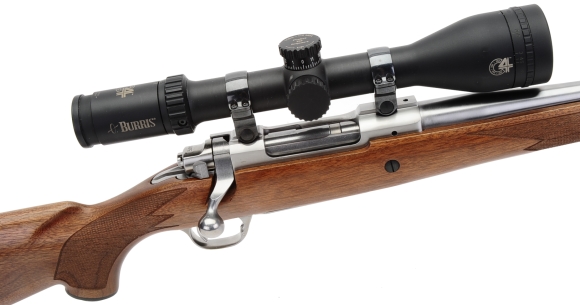 Using medium height Ruger Rings brings even scope with larger objective bells down closer to the rifle’s bore centerline where even face planted to the stock, line of sight passed through the scope’s optical center. All technical terms that are being mildly misused for the sake of verbal imagery.

Yes, PRC is an acronym for Precision Rifle Cartridge 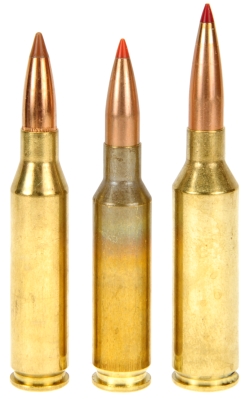 Hornady’s approach to the 375 Ruger was to remove the 0.513″ diameter belt present on the 375 H&H cartridge and increased the case body diameter to the original belt diameter. As a result, with less body taper and sharp shoulders, even when case shortened to 2.580″, the Ruger has greater powder capacity. The 6.5 Precision Rife Cartridge case is derived from the 375 Ruger. 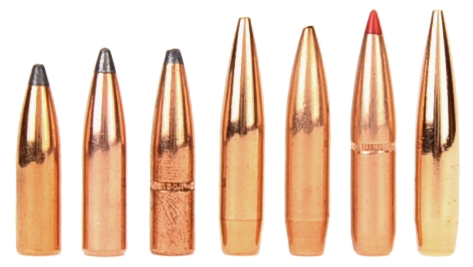 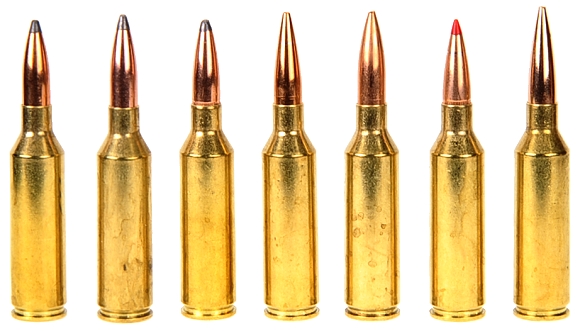 Wrapping up for now

The Ruger Hawkeye Hunter and 6.5 PRC are an excellent combination that is not done justice with my handloads. Accuracy was good, but powders selection were narrow and there are better bullets for hunting with the 6.5. The good news, from my perspective, is that the 6.5 PRC will produce with a 22″ barrel. There are many large capacity, overbore magnums that assume 260 Rem like performance when barrel length drops below 26″.

The Ruger Hawkeye Hunter has a good feel… like every good hunting rifle, every memorable hunting rifle I have carried over the years. It is well made, tough, made in America with American labor. Nice one from Ruger.