My wife and I date a lot. Yes, with one another. Something more typical in a fifty three year marriage than one might suspect. Two weeks ago, it was lunch after our consecutively arranged primary physician appointments. Last week it was a post CT scan brunch. In October we have the big annual post cardiologist dinner.

My wife goes to the doctor, primarily, to rub my face in her near perfect lab work and visit results. I go, in my way of thinking, because I am like a low tech, high mileage Ferrari in need of an occasional tune. My wife’s alternative theory, is that I am an old guy who needs to watch his diet and exercise more. Phonetically speaking… potayto, potahto. 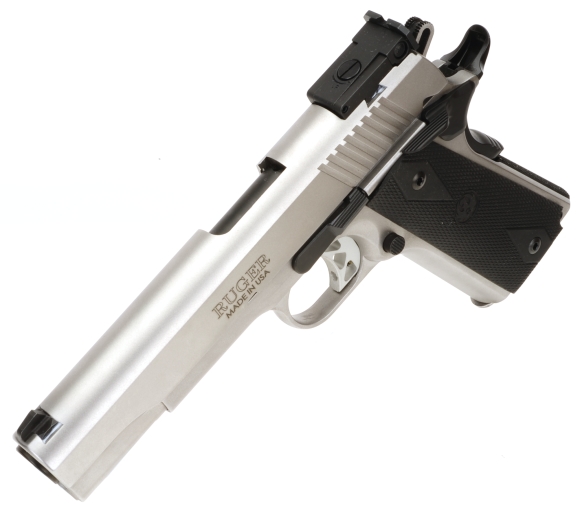 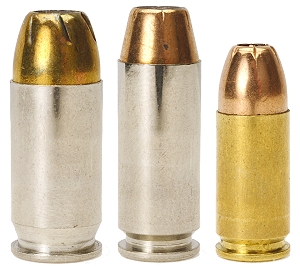 Of the calibers offered, the 9mm Luger is the easiest to control, the 45 Auto provides more power with only a slight increase in effort required to control. The 10mm Auto version is the most powerful and extends the SR1911’s usefulness to a legitimate wilderness trail and hunting use. For a mellow fellow, a 10mm Auto with full tilt loads may be too much of a good thing. For an experienced centerfire pistol shooter, it may be just right.

In early going, growth in use of the 10mm Auto was stifled by a lack of ammunition variety and supply and by manufacturers’ persistence in producing soft loaded ammunition. The latter robbing the cartridge of its potential. However, the 10mm Auto has bucked uneven popularity cycles and has aspired to command approximately sixty two factory loads, a composite of twenty brands, readily available through retail channels. Within that population, full tilt loads are available.

Unfortunately, we are not living in normal circumstance, so people tend to cache ammunition and manufacturers tend to shift production to the most mainstream cartridges. Consequently, of the sixty two factory loads typically available, approximately twenty loads under five brands are currently stocked by online retailers.

Some overview aspects of the SR1911 10mm Target 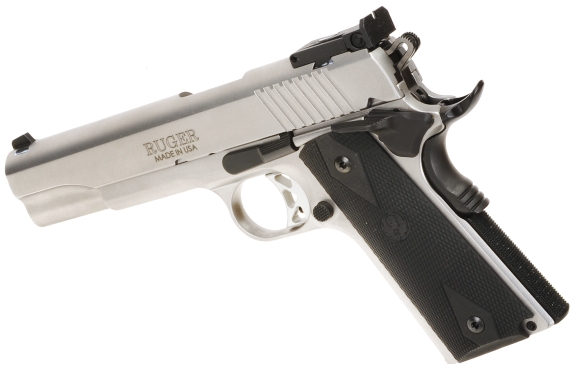 A well equipped 1911 with all the controls where God and John Browning intended, all in easy reach and all with positive actuation. And there are the nice touches of extended, narrow thumb safety, lightweight Commander type hammer, light weight trigger, and speed bump on the grip safety for folks with a lazy grip. Slide grooves appropriately placed to keep gripping hands away from the pistol’s muzzle.

The black sights, anti glare stainless finish and micro adjustable sights are quality pieces; long 6.9″ sight radius, with OK contrast and sharp profile against a target. For folks with a differing preference who might want, say, a bright green fiber optic front sight, they can easily be changed out.

For folks who gripe about the effort required to change a dovetail mounted front sight, you might try fitting a peened front sight on a 70 series Colt with a sight fitting backing anvil for a fresh perspective. 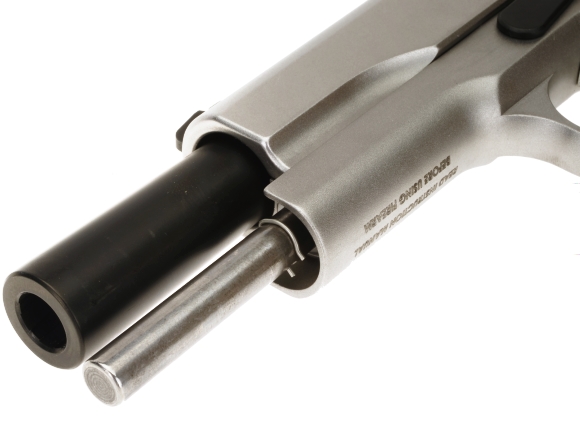 The personality of the Ruger SR1911 makes it softer shooting than most 10mm pistols. Key to this SR1911 10mm Auto’s attribute is the absence of a barrel bushing, its heavy profile bull barrel and slight increase in slide weight. The result is dampened reciprocating forces. This explains why the Ruger SR1911 has become my pistol of choice whenever copious amounts of 10mm Automatic ammunition is to be expended. Capisci? The little spring clip in the guide rod is used for disassembly. 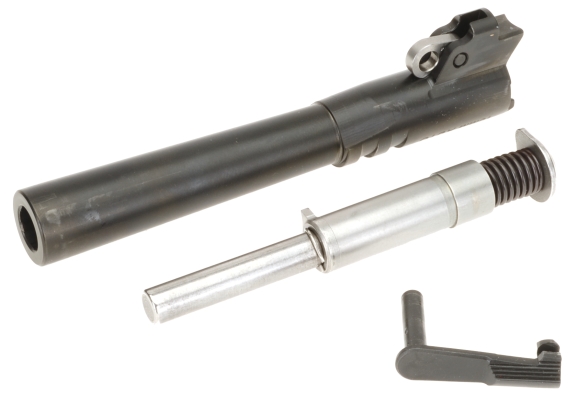 The little clip, “wire tool” in Ruger nomenclature, is pushed through the guide rod when disassembling to hold the guide rod, reversed recoil spring plug and recoil spring in a compressed state until the assembly is removed from the slide. A function of its bushingless design.

The Ruger SR1911 is effective in applications as shipped from the factory and it also responds well to typical 1911 modifications, accepting 1911 standard bits and pieces including tool steel fire control components. Standard 1911 trigger job fixtures, trigger bow forms, slide and frame rail fitting tools, and stones and files all apply.

For further information, the Ruger SR1911 10mm Target has previously been reviewed in detail on Real Guns®. That information, live fire review and handloads are available at:

I can’t speak for you, but I am here because I needed some inexpensive cast bullet loads for the 10mm Automatic round for practice, self defense as a trail gun and for deer and hog hunting. Do I not have to be here as a condition of my employment? Sure. That, too or, maybe it’s “Sure, that too”. 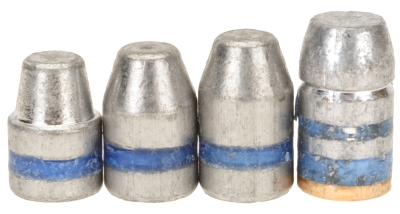 155 grain OAL is critical, as is going easy on the taper crimp. The reduced velocity load listed is a practice load, but not so light as to cause cycling problems or require a recoil spring change, and they actually have quite a bit of thump. For self-defense it is a very controllable load and it offers a bit less penetration of walls, appliances and the car parked in the garage. 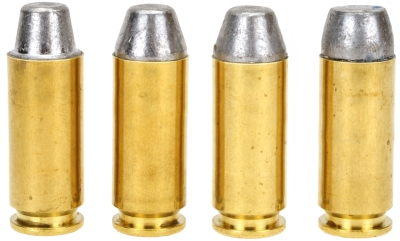 The form of the 155 grain SWC has been altered in more recent production to be slightly shorter to keep inside maximum overall length and all production is now red Hi-Tek coated. Loaded to 1.250″, edge of bullet meplat pictured hits barrel ramp ahead of case mouth, preventing feed problems. The 10mm Auto cartridge headspaces on its case mouth, so all cases were trimmed and outside/inside reamed and taper crimped. No, you should not skip those steps and call it done.

I would have to classify these handloads in the Ruger SR1911, with one exception, as… invigorating. Sharp muzzle climb with the hand and wrist going along for the ride. In other words, more than micro aggressive to Democrats, but satisfying to Republicans and Independents. I don’t know about Libertarians, they don’t respond to surveys.

Heavy lead probably doesn’t make a lot of sense to kinetic energy junkies at first blush… glimpse, not the face coloration, but penetration is greater as are retained energy and velocity and then penetrate harder surfaces than gelatinous gel. If I had to break the shoulder bone of a black bear for some indeterminate reason, my preference would be for heavier, hard cast bullets or a safe place to hide.

For personal defense, proficiency training and recreational target shooting, the 155 grain probably makes a good deal of sense. For a trail gun or hunting, heavier is probably better. Personally, I like 200 grain loads as a balance of velocity and sectional density.

AA #7 and Long Shot powders ran a little hot and had to be backed off from some of my historical load data. Pressure build was not linear in work up, with pressure spiking nearing max loads. Others were more well mannered. I would like to spend more time with CFE Pistol as there appears to be greater potential. 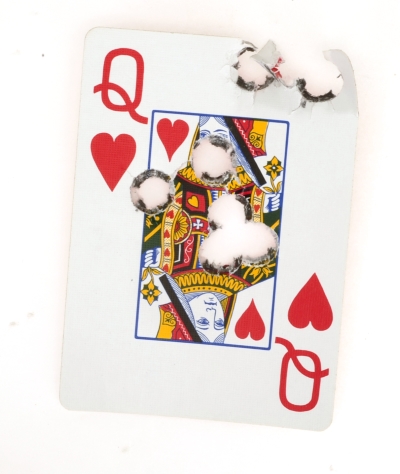 Official 50′ targets. Within the context of this article, I see the Ruger as a 50 yard gun being shot by a guy with 50 foot eyes, at least with metallic sights. 200 grain bullets shot the corner off the queen with three shots, before it dawned on me that I could aim lower and nearly put five into the 1.25″x2.0″ inner rectangle. Accuracy that could be matched or bettered with many of the handloads on the table. 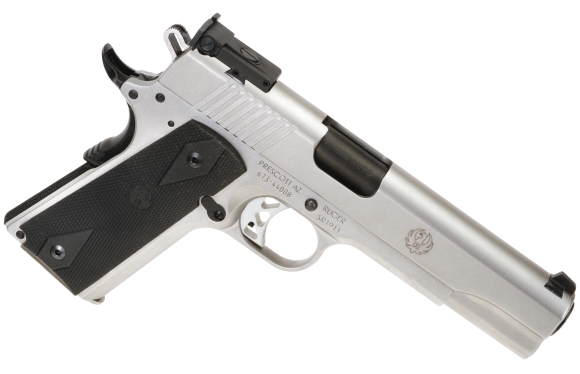 Empties, without playing with recoil spring rates, were deposited a… generous distance from the shooter. For most applications, I would rather have the certainty of ejection and reliable cycling than having reloadable brass drop at my feet. The force of ejection can be tuned to shooter preferences.

Are you happy with yourself and the Ruger, Joe? You bet.

I write about Ruger firearms a good deal. Most of the work I do is related to shop work: handloading, ammo check out or gunsmithing with reviews being derivative rather than the objective. Ruger happens to make workhorse firearms that hold up to hard use, are accurate, respond to modification, and photograph well. The Ruger SR1911 Target 10mm Auto is no exception.