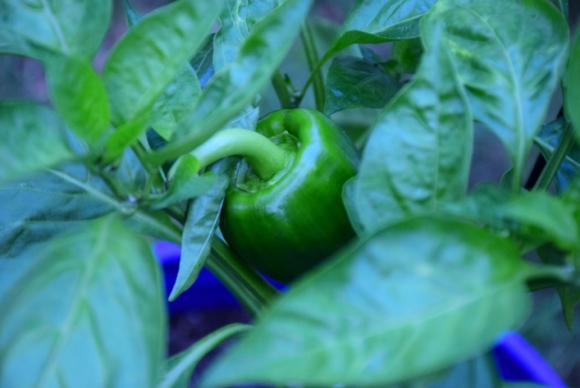 I guess my life has changed since the Mesozoic Era when I was a young man. Jeans and t-shirts and not venturing far from home have replaced business suits and constant travel. Now, my wife and I poke around in our vegetable garden hoping to spot the fruits of our labor.

No more pursuits of exotic cars and motorcycles. My wife and I are all set with a little turbo charged Ford Escape in the garage, parked next to a garden tractor. And when we want to travel, it’s for personal enjoyment, not for work or necessity. A lack of ambition? Not at all. Just different directions and priorities.

Living on a parcel of woodland, we can shoot firearms when we choose, hunt turkey and deer, run machinery in the shop without disturbing neighbors and generally remain insulated from people and places we see on the news. No sounds of street traffic or night light pollution and, if my wife and I choose to extend our horizons… universe, we can break out a telescope.

Our children and most of our grandchildren are grown, healthy and safe. Now we can sit on the sofa at night, watch TV or read, plan projects or road trips and hold hands. It took seventy four years to get to this point in life, this peace of mind. I hope you people arrive there sooner..

Growing up, friends were deer hunters. Most father’s in that group were WW II or Korean War vets, who knew firearms well, did not discourage their use, but did not personally pursue shooting sports. So we learned about firearms by reading, hanging out at gun shops until we were ejected and from shared personal experiences.

My first shotgun looked a lot like this vintage sixty two year old Savage Model 202B 12 gauge single shot with 2 3/4″ chamber. Actually, this is my first shotgun and I so still own it. The case hardened finish is worn away, the stock has been cleaned up and refinished numerous times and the barrel has been stripped and rust blued.

Purchased with part time job earnings in the summer of 1959, it remained my only shotgun for quite some time. One of my buddies had a Browning Auto-5, a gift from parents, that was beautiful. It was always a pleasure to shoot when the opportunity arose, but I could not afford one at that age, so game birds, deer and small game were pursued with the Savage.

As a mature adult, I am not accomplished at skeet and trap. Meaning, I typically stand a better chance of blasting a flying clay target by drawing a 1911 45 Auto, then hitting it with any form of shotgun. Yes, that is the reason shotguns rarely grace the pages of Real Guns. I would say the leading cause of arrested shotgunning development is lack of practice and infrequency of outings.

However, while my shotgunning skills may be well developed, I can still appreciate a shotgun for its mechanical design, fit and finish and performance in my hands and in the privacy of my own… woods. And it does appear that a good shotgun can make me look better with a shotgun than I deserve.

So, Joe, why do you like the Browning Citori 725 Feather Superlight

I have to say I felt an instant affinity for the Feather Superlight, but it took a while for me to figure out why. At the top, there was a sense of nostalgia. Part of it was childhood associations with Browning shotguns, part was the modern company’s namesake and part was an overall European look. I love classic European firearms, not a fan of their modern governments.

There is something very attractive about a dark oil finish, a select grade of walnut, a graceful straight grip and Schnabel forearm, touched with just enough cleanly cut, bordered checkered panels. The care exercised in manufacturing and assembly is reflected in an outstanding wood and metal fit and finish.

The silver nitrided aluminum alloy receiver compliments the oil finished walnut and stainless steel pieces. The laser engraving is cleanly done and the design is appropriately restrained art. Engraving technology, in other brand firearms, has provided some comical scenes; birds apparently flying out of a ill proportioned hippopotamus’s butt, deer with a head the size of its body and what might have been a depiction of the Killer Rabbit of Caerbannog. Not so with the Superlight. Browning put just enough quality game scene and just enough flowing scroll work to give the Superlight an… elegant appearance. 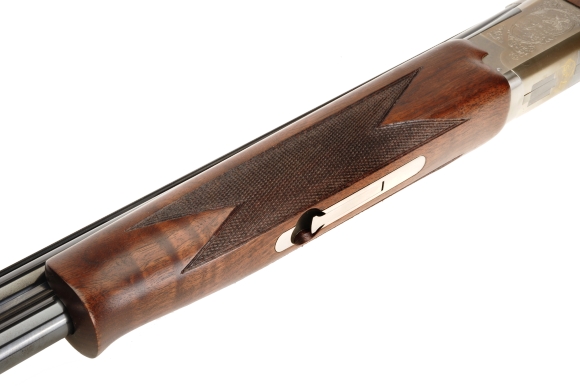 The clean inletting and fit of wood to metal is all over, not just at the receiver. The wrap around the deeply blued barrels and inletted stainless forearm latch are a tight fit.

The black walnut is listed as grade II/III. Unlike my old savage, the forearm and buttstock are a match in grain, finish and color. The wood has nicely figured grain and contrast and just the right amount of stripe to make it interesting.

Center of the universe 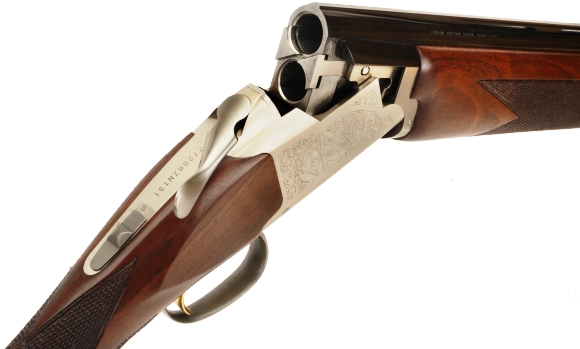 Unlike double and single barrel rifles that seem to have a magnetic muzzle to earth attraction, the Citori 725 balances at the hinge pin, giving the barrels a… neutral feel. Not light, not nose heavy, just enough heft to feel steady tracking flying clay targets.

Like a1963 Ford Galaxy lightweight Super Stocker… only not a car. 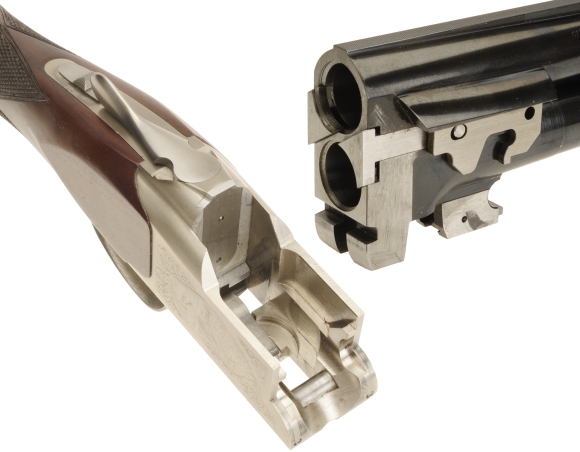 In applications where light weight contributes to performance, the trick is to remove parasitic weight, without diminishing strength. In this regard, the lengths Browning went to to achieve that result is obvious to any firearm enthusiast.  The mono-block receives a full width tapered locking bolt and barrels hinge to a full width steel hinge pin. The breech face insert in the aluminum receiver is stainless steel. The action locks up like a bank vault.

The FireLite mechanical trigger has a clean, crisp release, short take up, minimal overtravel and does not use an inertial mechanism to fire the second barrel. Subsequently, the second barrel will discharge even if the first barrel was a misfire… empty chamber, failed primer, etc. in the absence of recoil. The Feather Superlight has a fixed position trigger, where target model Citori 725s are shipped with three trigger types: wide checkered, narrow smooth, and wide smooth canted trigger shoes and they can be adjusted fore and aft to set length of pull.

The safety selector is moved fore and aft for safety on or off position and side to side to select which barrel to fire first. I can say the system works, is reliable and intuitive, but my level of shotgun proficiency has not resulted in a first barrel to discharge preference.

The subject Featherweight Superlight was supplied with three Invector DS chokes: Full, Modified, Improved Cylinder with each marked for choke effect with lead and steel. They are packaged in a poly case with a choke wrench. The brass seal must really work because clean threads made changing chokes easy. 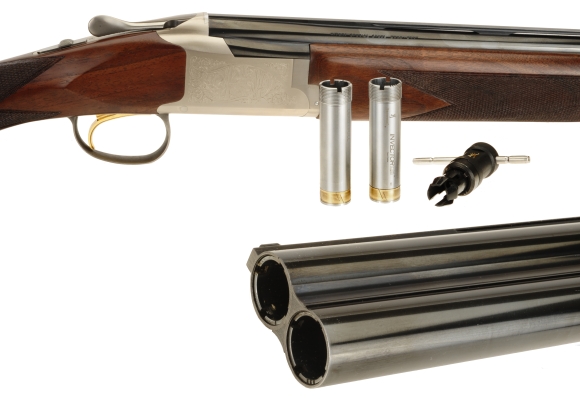 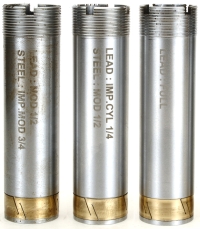 I was tempted to just say, the Superlight has back-bored barrels, but that would be an incomplete description. Browning employs an integrated systems approach they have labeled Total Barrel Dynamics. An attempt to make a boring subject sound interesting? Fortunately, not.

In the case of the Browning Citori 725, the chambers are chrome plated, the forcing cone is extended to more gradually move the shot to the bore. The barrel is back-bored to minimize shot deformation, maximize velocity and reduce bore friction without letting gas slip past a shot cup. The Superlight utilizes the Browning Invector DS (Double Seal) choke system with longer taper that compliments the forcing cone and back-bore design.

In deference to the shotgunning public that would benefit from greater insight, Browning has done an excellent job providing further information. For me, if a clay target is flying away from me or across, and it does not escape, the rest of the detail is mostly a theoretical conversation.

It amazes me how well that thin 1/2″ Inflex II recoil pad takes the starch out of 5 1/2 lb gun – 20 gauge recoil. The pads on my rifles always feel like giant gum erasers that grab at my shirt and won’t let go. The Superlight pad is smooth, effective, but never in the way.

Rifle and handgun shooters have an absolute reference for alignment on a target, so it is possible to overcome a poor fitting stock, less than idea trigger and a floating cheek bone to score a hit. Shotguns are pointed, not aimed, and targets are mostly in motion. So stock geometry, drop at heel and comb, cast, and pitch combine to either make a shotgun point naturally or provide a great deal of frustration.

When the Browning stock was shouldered, it always fell into the same position, cheek supported on the stock and the center bead positioned just below the front bead and over the target. I’m not sure what is preferred, but that predictability allowed me to successfully line up and lead clay targets. The Citori 725 never felt like I was dragging the weight of the barrels to keep up with a target. 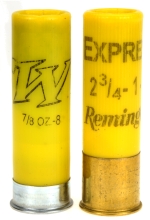 Initial use of a hand held clay target thrower resulted in the wind chimes being knocked off the back porch and I put one on the garage roof. So I dragged out a Trius One Step Trap, missed the first two targets, the second was close, then hit on the next 8 in a row. Okay, next 7 in a row, but seriously wounded the 8th.

At that point, I quit. I am typically a terrible shot, so that to me was excellent and I know I would not have done half as well with another shotgun. The Feather Superlight seemed to put the muzzle where it was suppose to be and tracked… (led?) so well, I did not feel rushed taking a shot. It was certainly not a punishing gun to shoot.

There are guns and then there are special guns

I am too old and I have shot too many firearms to get excited over marketing messaging and purported prestigious brands. There are lots of nice guns… lots. But the Browning is something special. You know how relatively young people sometimes seem to be old souls? I think the Browning Citori 725 Feather Superlight is a technologically very modern firearm, but with a very old soul. Maybe as much English tweed as camo. Nice shotgun.

I do not know much about shotgunning. I tend to think of shotguns, for the most part, as the firearm of choice for golfers and Canadians, the more… evolved sectors of modern society. Reluctantly, I would have to admit that shotguns work well when there is a need to terminate a turkey, or a squirrel,…