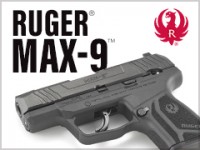 I’m itchy. Spring has sprung and the woods are emerald green. So I have been tilling compost into the garden and topping the lawn, while attracting the smallest insects that leave the biggest welts. Today, I got a break. It is drizzling now, but heavy rain is in the forecast, so I can gather my notes and finish writing about the new Marlin Model 1895 Trapper.

Ruger did more than bring continuity to the Marlin brand, they restored the brand’s reputation.

Between the Marlin Company’s 2000-2008 production, and production following Remington’s acquisition of Marlin, it had become common for new guns to be delivered with handling scratches, tweaked screw heads, compression spots on checkering, and ill-fitting stocks.

Now, when I open a box containing a Ruger-produced Marlin, the product inside is pristine, the manuals are of good quality and pride of ownership is packaged with the purchase. Credit given where credit is due.

The return of the Trapper

December 2021 brought the Model 1895 SBL and the first Marlin production under the stewardship of Ruger. May 2022 brings us the Model 1895 Trapper’s return to production, with Ruger now leading with two powerful 45-70 lever action rifles.

If you are not familiar with the Trapper version of the Model 1895, it is shorter, lighter and less superfluously accessorized and embellished than the SBL. Both models provide the same 45-70 thumper power.

Both SBL and Trapper are smooth operating lever action rifles but, personally, I like the Trapper’s satin finish stainless aesthetics and the omission of the Picatinny rail as an accommodation for New England woodland and brush hunting.

The Ruger manufactured Marlin 1895 Trapper is nicely done. Ruger’s choice of a quality black laminate stock and resilient recoil pad, versus Remington’s years past choice of a hardwood stock with textured black, rat rod paint job. The overall quality of current production speaks volumes to Ruger’s commitment to the brand.

And the improvements are not limited to the visible surfaces. This is the first time in years I didn’t get a cut thumb when trying to push rounds through an unfinished, sharp edged loading gate.

The fluted bolt is nickel plated. Fluting prevents build up on bearing surfaces so operation remains slick and nickel is a great barrier to corrosion. The receiver sides and trigger guard plate are fashioned from 416 Stainless, CNC machined from forgings. The barrel is 410 Stainless and cold hammer forged. 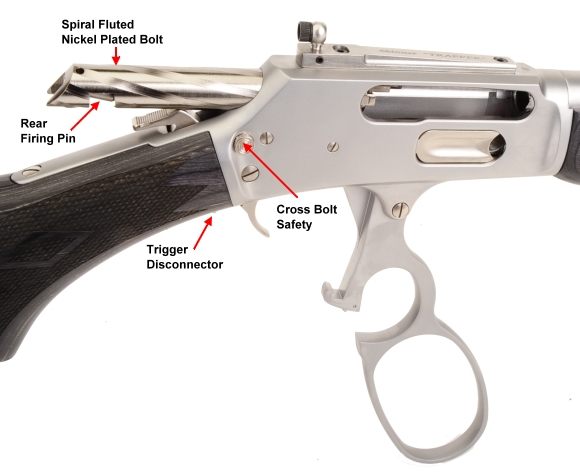 Safety features abound… Yes, you read that correctly, “abound”. The rear firing pin is blocked from forward travel until the lever moved the forged locking bolt into position in the bolt notch. For traditionalists who need to hear the right number of clicks, the Marlin 1895 retains a half cocked position… which is, of course, redundant for deer hunters coming in from the city. Half cocked position is old school safe, but the cross bolt is double and welcome assurance.

The large loop lever allows the use of heavy gloves without deterring operation. Nice way to keep your fingers on your hands when temps drop well below zero. The trigger disconnector renders the trigger inoperable until the lever closes, closes the breech and depresses the disconnector. The cross bolt safety mechanically blocks the hammer from falling to the firing pin. The forearm is slimmed down compared to other companies attempts at making the Model 1895. Very nice.

Muzzle threads are 11/16″-24 for affixing brakes or silencers. The thread protector pictured is included. The Trapper was shot considerably with a SilencerCo Hybrid 46 which is rated for the short barrel. It did a great job suppressing noise and reducing recoil.

If you get one of the limited production guns with the arrows in place, let me know. The Model 1895 receiver and barrel are tapped to allow for many configurations of sights. The Skinner rear sight uses three holes, counting from the back. 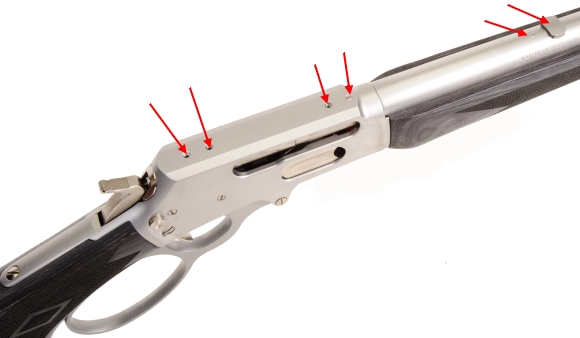 Setup for the range 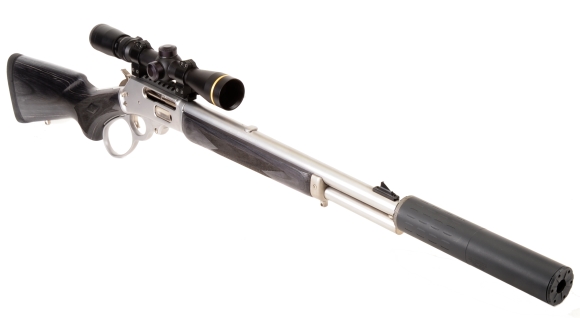 Who in the world puts a scope and silencer on a nifty little carbine? Anyone who wants to separate eyesight from a rifles mechanical accuracy and plans on shooting a lot of full tilt ammunition from a shooting bench. Specifically, me. 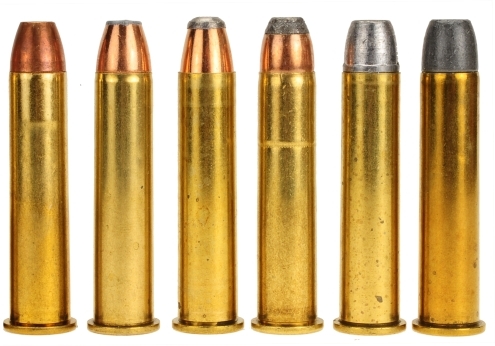 It is a tack driver. Just a really big tack.

It is easy to shoot a little shoulder pounding carbine over a long range day, just park it in a shot bag laden shooting sled. These little lever guns are accurate, as is the factory 45-70 cartridge and quality handloads.

Loss of velocity due to the shortish barrel varies from an actual uptick in performance over longer barrel guns, to a moderate loss. For me, barrel length would not be a concern, so why not go with the lighter, compact gun?

Pros and… some more pros

Could just be me, but I like stubby powerful rifles. In this case, a rifle that is easy to haul around in the woods, accurate and convincingly powerful enough for any North American game.

Two hundred yards is a along way off in woodland hunting. In a recent impromptu survey of FedEx and UPS drivers, the consensus was that fifty yards is a long shot in most parts of Maine. The Trapper is point blank range out to 172 yards with the bullet never rising more than 3″ above line of sight. And the Trapper does it with bolt action like accuracy. 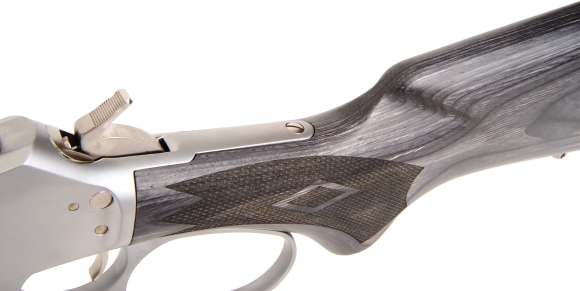 Stock fit is so nice wherever wood meets metal. No rises, no sink holes, no space to stow your lunch between the barrel and forearm. Ruger must have really put in the overtime to get this production result.

Ruger produced Marlins are manufactured in Mayodan, North Carolina. Why would I not want the good people of North Carolina to provide for themselves and their families as a reward for making an excellent product? A long time ago, it was easy to get lost in the notion of old world, gun manufacturing in foreign lands. Not any more.

Today, Western European companies may have administrative office addresses in places like Belgium, Germany and Italy, but predominately, their manufacturing for U.S. import is done in low cost labor markets like Portugal or Turkey. Many of the piece parts are actually made in China or Korea.

The Marlin 1895 Trapper is a super little lever gun. Can’t wait to see what Marlin will have for us next.

While Waiting With Positive Anticipation For Ruger’s Marlins…. Part II Closing the year with a big bang... 45-70 handloads

12/05/2021 – In Part I, I was wandering around, pretending to be writing, when all I was really doing was looking for an excuse to shoot my Marlin 1895. Mission accomplished. Still, I was able to spend some time working up handloads and information I could share. Lets not make a federal case out of…

I like machines. They have no attitudes, they have no agendas and how they perform and react is always logical. When it doesn’t appear that way, it is only because there is something we’ve overlooked or don’t understand. Persistence in problem solving will always prove the previous to be true. So my chipper won’t start…

The title suggests that a 45-70 Gov’t shooter can elect to use milder cartridges and still decisively kill deer and black bear; ammo that generates less recoil and ear splitting report. However, within five minutes of publishing, someone will pose the question, “Why would deer and bear need light 45-70 loads? Are they too lazy…

Warning: SAAMI standard pressure for the 45-70 Government is 28,000 PSI. All of the listed loads are approximately 40,000 psi. They are not intended for use in original trapdoor single shot rifles or early Marlin Model 1895 or Winchester Model 1886 lever action firearms. Bullet selections are specific, and loads are not valid with substitutions…