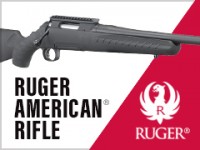 08/29/2021 – Differences amongst generations present themselves in many ways. As an example, I was surprised when my spell/context checker advised “Amongst is often considered old-fashioned or pretentious in American English, so you may want to avoid it“. It seemed like only a few weeks ago when Mrs. Thornburg explained the difference between “among” and amongst”. Among infers one as part of a group, where amongst infers one within a group. But that was sixty seven years ago, so… standby whilst I research a bit more.

Our eldest and his family came to visit. It was during a guestroom Venetian blind raising exercise that he noticed a squealing sound coming from the blinds cord, cord lock and cradle mechanism. He identified the problem area as “The grabby silver thing where the cords go through”. Yes, I did snicker at his terminology, as fathers sometimes do, in an effort to show superiority of no consequence.

What does all of this have to do with firearms? Nothing. Thinking about how and where to start a new firearm article is a lot like watching a spinning merry go round before attempting to jump on.

Beneath the M&P12’s non-traditional appearance, numerous unique controls and truncated design can be found a very practical home defense firearm. Yes, practical does depend on the definition of home. 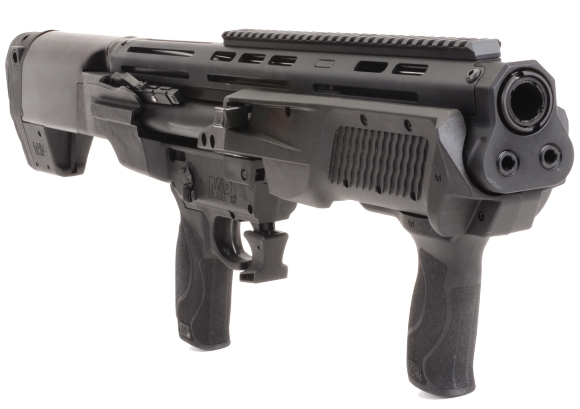 My wife and I live in a rural residential environment, mountainous and densely wooded, far out of sight of neighbors.

We do not have a city police department, so routine patrol and emergency response come from the county sheriff’s department. A very good group, but distance and back roads could put them out a critical 15 minutes or so.

Our town is virtually crime free, but the world around us is not. Drugs and desperation can cause people to do less than rational things and bring about the possibility of crimes of opportunity.

Is crime a high probability? Absolutely not. However, having a firearm is an issue of preparedness, just like having home first aid kits and fire extinguishers.

Despite the pump shotgun’s common role in home defense, I am not advocating their use. The choice of weapons and ammunition is up to the individual and very much based on preferences, circumstances and abilities.

At an extremely compact 27.8″ in overall length, the M&P12 is short, even with a 14.5″ length of pull and 19″ barrel. That is about a foot shorter than a traditional pump gun of similar barrel length. Shot from the shoulder or from the hip, the S&W M&P12 is more maneuverable inside the home in close spaces and it doesn’t offer a “grab handle” in front of the person clearing an area.

The S&W M&P12’s combined twin tube magazine capacity is 14 rounds of 2 3/4″ ammunition or 12 rounds of 3″ magnum. A capacity approximately double the capacity of traditional defensive shotguns. There are, of course, minor penalties associated with such large capacity.

Keeping in mind the intended applications, and the recoil of a 12 gauge, the extra heft is a welcome passenger and shooting from the vertical grips, and during routine handling, the bit of extra width was not objectionable. 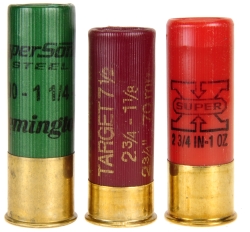 With either of the supplied modified or cylinder choke tubes in place, Smith & Wesson approves the use of lead, steel and lead substitute ammunition in the M&P12. Slug ammo intended for smooth bore barrels is also supported.

The M&P12 should not be fired without a choke in place to prevent damage to the barrel’s internal choke threads. Approved ammo length is 3″ magnum down to 1 3/4″ Mini loads.

The M&P12 was shot with three types of ammunition respectively intended for home defense, proficiency training and pest control. No, not an ammunition recommendation, just a point of reference.

Click on the expanded image icon for the top image to see the annotated version. From a shooting standpoint there are only the basic controls, the safety selector above the grip, the trigger and the fore grip to cycle the action. The rest of the controls are associated with the M&P12’s unique features; Action Lock, Magazine Tube Selector, Load/Unload assist, etc.

Even with the side by side magazine tubes, the Smith & Wesson M&P12 is 3.7″ at the widest point. While not idea for concealed carry, it does provide something to grab and hold onto when carrying or shooting. 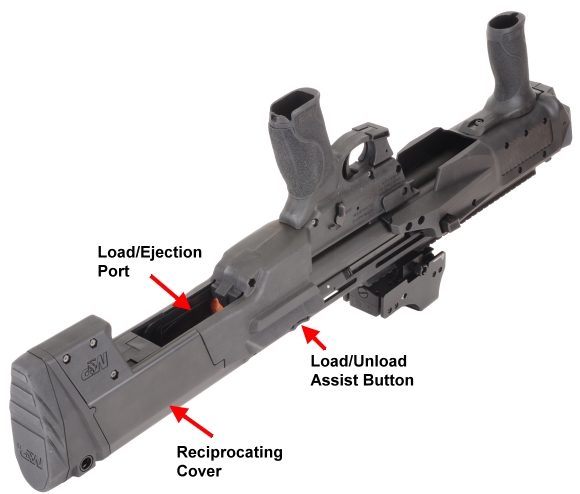 The M&P12 loads from the bottom. Depressing the respective magazine tubes load/unload assist button allows insertion or removal of a loaded shell. In the event of a jam, the reciprocating cover can be pulled back 1 3/4″ to gain additional room for pulling jammed rounds.

The easiest way to load and unload the S&W M&P12 is either belly up, or muzzle rested down. It is easy to top off by rolling the shotgun over and cradling it against a forearm. For all of the departures from a traditional shotgun design and operation, it does not take long for operation to become second nature and handling more fluid.

The loaded chamber indicator is a welcome presence on the M&P12. It does not take the place of an empty chamber safety check, but it is a handy heads up for a loaded chamber that does not require flipping the gun over and opening the action to withdraw the bolt.

The topside of the M&P12 is actually pretty clean. Above, the magazine tube selector and load/unload assist buttons are easier to see. A brush guarded red dot sight was installed for some of the longer range shooting, however, the M&P12 was also shot from just above the hip, with the buttstock tucked under my arm. The fore grip and rear grip make for a very reasonable point and shoot proposition with shots inside 15 yards and #2 or 7 1/2 shot ammo.

The Smith & Wesson M&P12 is a lot of gun. The 19″ barrel makes for considerable report and 3″ magnum loads will definitely prevent dozing with the recoil pad against a shoulder. I would not hand the M&P12 to my wife in a defensive situation. She does just fine with  an autoloader pistol or revolver. Still, the M&P12 is a lot of fun to shoot and predictable shot placement within any reasonable range takes minor practice.

There are, of course, many types of ammunition that feature: fewer pellet count – larger pellet size, reduced recoil, less lethal, low and high base. Nothing exotic is required when looking for an effective load for any application. Nifty pump gun. 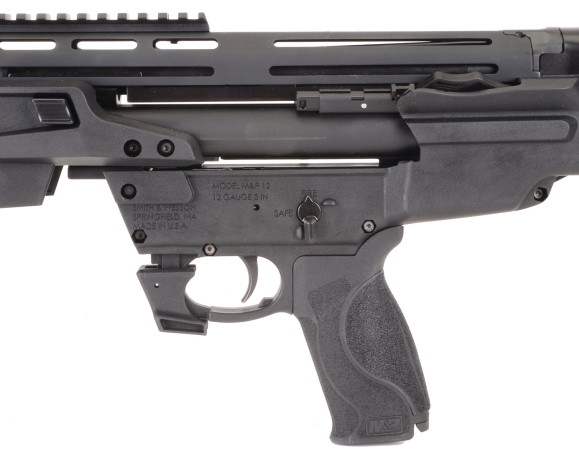