Yes I have been trying to improve my writing skills and to adopt some new perspectives. No, I have not yet succeeded and, no, I do not deem twenty years in pursuit of those illusive goals excessive. In any event, I signed up for the Wesleyan University Creative Writing Specialization Program. Tuition is typically $84,000…

Ruger American® Ranch Rifle – 350 Legend You don't have to own a ranch to... own one

04/11/2021 – Conjuring a spring snow storm in Maine is fairly easy, especially if employing the most successful techniques. The tractor, set up for mowing, was pulled out of the shed where it spent the winter months. The driveway snow markers were removed until next winter. The first spring barbecue was scheduled based on a…

The tractor’s battery needs to be charged so we can get it out of the shed. The green house needs to be assembled over the garden. The Travertine in the upstairs shower needs to be scrubbed and resealed. Which is why, on this Saturday, my wife and I decided to make fifteen bean chili… to…

Can the terms “AirLite” and “44 Mag” Really Coexist? Lightweight handguns... a personal journey... from my personal journal... really

The Benelli family formed a motorcycle manufacturing business in 1911. In 1940, a Benelli family interest in hunting led to the manufacture of shotguns. By 1967, the firearm business had progressed sufficiently to warrant the formation of Benelli Armi SpA.

Urbino, Italy based Benelli Armi SpA was acquired by Beretta Holding in 1983. With 279 employees and sales of $123 million, Benelli is a major brand operating under Beretta Holding.

Benelli Armi SpA manufacturers a multitude of firearms: including semiautomatic, pump and over & under shotguns. Additionally there are semiautomatic and bolt action rifles, as well as competition rimfire, centerfire, and air powered pistols. The company’s markets are civilian, military and law enforcement.

Introduced by Benelli in January 2020, the Lupo was initially offered in 270 Winchester, 30-06 Springfield and 300 Winchester Magnum. Caliber selection has since been extended to include the 243 Winchester, 6.5 Creedmoor and 308 Winchester, further broadening the rifle’s hunting applications.

Manufactured in a form that could easily pass as a sleek, traditional sporter, the Benelli Lupo is actually a highly configurable chassis rifle that nominally weighs less than 7 lbs and is guaranteed to deliver sub MOA accuracy. In spec box form, it looks a bit like this:

Italian engineering if often elegant in innovation and artful in execution. However, unlike a $100,000 Ducati Superleggera or a $625,000 Ferrari SF90 Stradale, owning a Benelli Lupo does not require a tech executive’s income, the presence of a midlife crisis and/or a mandated appearance in divorce court. Within the world of quality production rifles, based on price tag and value received, the Lupo is quite a bargain. 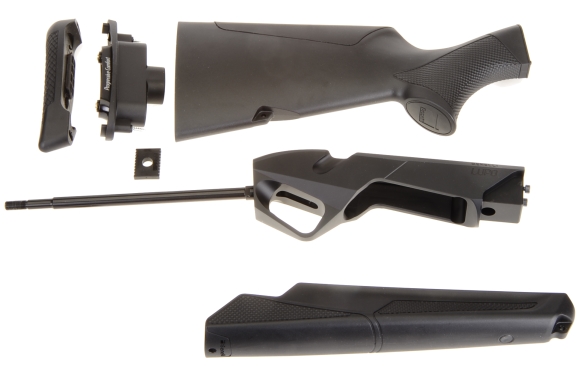 The Benelli Lupo mounting system is actually three primary components. Above – Top, the buttstock system is comprised of a Benelli’s Progressive Comfort recoil absorption system, a polymer buttstock that is adjustable for drop and cast off and, optionally, comb height. Above – Bottom a forearm that provides shooter support, but does not contact the rifle’s barrel/ Above – middle, a hard anodized aluminum chassis that mounts the buttstock, forearm, magazine, and the rifle’s barreled action.

A top down view the aluminum chassis. The rifle’s action is secured to the chassis with a rear top-down fastener and one bottom up fastener The magazine release spring assures that the flush fit magazine pops down when intended. The steel insert recoil lug interlocks with the action to take the bulk of the thumping.

Perhaps better context, the aluminum chassis is sandwiched and secured between polymer forearm and buttstock. Chassis? Frame? The manual refers the action as the upper receiver, which by default makes the chassis the lower receiver. I tend to think of a lower receiver as something that is the second functional half of an upper receiver, typically holding a rifle’s magazine and fire control parts. In this case, fire control and safety pieces are a part of the rifle’s bolt action the lower assembly plays more of the role a composite stock’s aluminum chassis. It securely and predictably mounts the barreled action to the stock assembly.

The Lupo is supplied with a low, straight comb insert in place. A medium and high comb are available as accessory options. The combs can be changed by removing the recoil pad and progressive comfort system and unlatching the comb from inside of the stock. Combs and larger… thicker recoil pads can be purchased at the Benelli web site or through Benelli dealers. 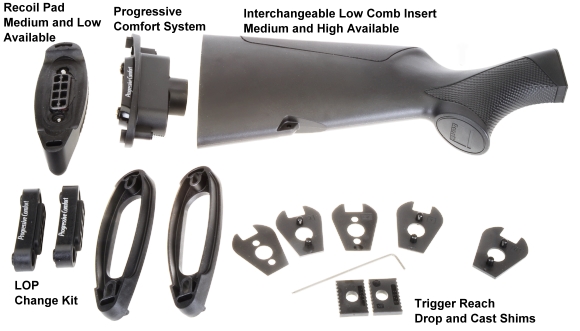 A drop/cast change kit and length of pull spacers are included with the Lupo. Following a matrix in the rifle’s manual, drop can be increased or diminished in four increments each way, with and without cast. The spacing between grip and trigger can also be increased. The rifle is shipped with no spacers for 3/4″ of drop at the comb and heel, relative to bore center line. Maximum spacer adjustment yields 55mm up or down, or just under 2″. A range greater than anyone would need. 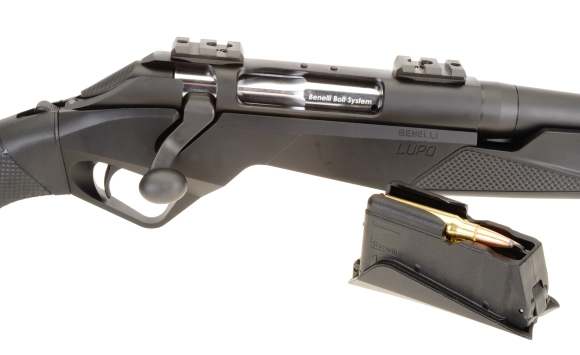 The five round magazine, four for belted magnum rifles, fits flush to the bottom of the stock and is held securely by a recessed latch. The recess is long enough to permit release with a gloved hand. A magazine release spring affixed to the chassis pops the front of the magazine out for easy removal. The magazine staggers cartridges from side to side to get five rounds in a small space. The magazine can be replenished in place through the rifle’s ejection port. Additional magazines can be purchased through Benelli and Benelli dealers.

The tang safety is a basic two position arrangement, on or off. The bolt is not locked when the safety is engaged. A small red tab, at the back of the cocking piece, protrudes from the bolt shroud when the striker is cocked. The Benelli Lupo is supplied with preinstalled, two piece rail mounts. Cross section is Picatinny/Weaver, however, space between slots is not. Any Picatinny rings with single cross interlocks would work, such as the Warne rings used during the project. 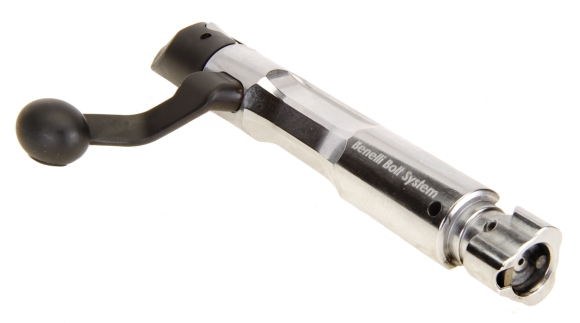 The bolt is full diameter with trilobal lugs. Yes, trilobal is a real adjective and I am using it without remorse. Bolt lift is 60°, the bolt face is recessed to contain a cartridge case head, the extractor is a sliding type and the ejector is spring loaded. The bolt handle is removable. I want to call it “dog leg” but it is not. The handle tucks flush into the chassis, then sweeps aft, placing the knob right where a shooter would grab. Cycling the action and stripping a round from the magazine feels like the bolt is running on roller bearings. Very slick. 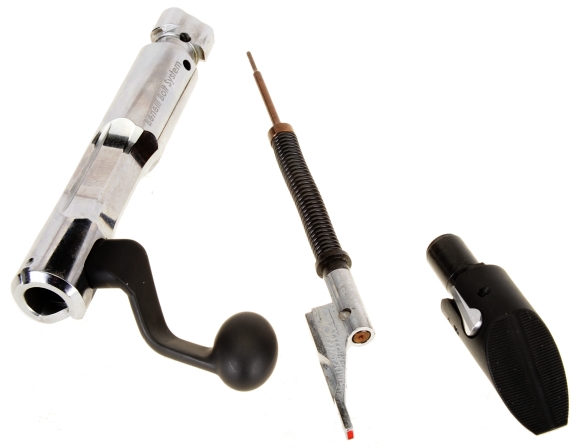 I have three kinds of tools for removing and reinstalling bolt action strikers, not counting the hardwood edge of my desk that I reserve for MILSURP M98 Mausers. This was the easiest bolt to disassemble, clean and reassemble. No tools required, just a push of the button on the bolt cap… Benelli nomenclature, rotate clockwise to the index mark and pull the striker out. I was going to measure striker spring rate and compare the striker assembly weight, but I got distracted gathering targets and ammo for live fire and forgot. Trigger pull was light, but lock time seemed brief. Feel and listen to firing pins drop on primers long enough and the fast ones stand out. Next time I will use more objective measurement.

The Benelli’s action is tubular, which makes for large surface area contact where secured, and uniform pressure at those points. The forward notch locates the action longitudinally to the recoil lug embedded in the rifle’s chassis. The trigger is exceptional. The subject gun’s trigger pull checked 2 lbs 13 oz. It was so clean and so crisp, I left it alone. Adjustment could have been made with the included wrench, through the ejection port, no action removal required. Neato. 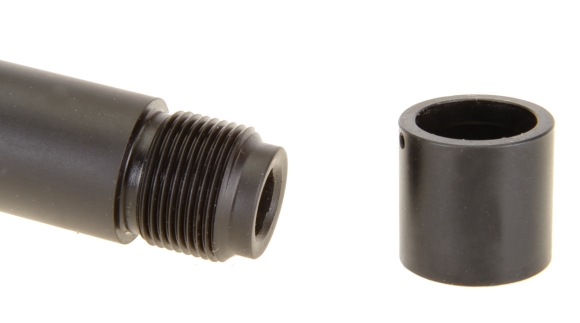 The 5/8″- 24 barrel threads opens the door to all sorts of muzzle devices. In this case I was happy to install a SilencerCo Omega 36M silencer, as were my distant rural neighbors and assorted and sundry wildlife. A quick attack set up, I was able to shoot with and without silencer in the event it diminished the rifle’s accuracy. However, the silencer had no such negative influence on the rifle.

I wish I could tell you the Benelli Lupo was taken on a Tuscany roe deer hunt. I cannot. I did, however, put on my L.L. Bean muck boots and hoofed it out into the woods through late winter… muck and put up some 100 yard targets and shot from a rest, placed on a bench.

Two types of factory ammunition were shot through the Benelli Lupo, Federal Power Shok 150 grain soft point and Federal Premium Edge TLR 175 grain. The Power Shok was selected as a good for deer hunting and typical of non-specialized 150 grain ammo. The Edge TLR was selected because it is heavy for caliber and I wanted to see how it stabilized with 1:11″ rifling. The silencer was left off during data collection as this is the way the rifle would typically be configured.

The Benelli Lupo may be a lupo on game, but not on the shooter. The recoil pad yields progressively to decelerate recoil, while transforming structure and retaining stability. The result is a light, soft shooting rifle. With the silencer or a brake in place it was like a vacation day. For all of the engineering and tech at work in the Lupo, none of it got in the way when shooting. I’d guess the most difficult decision a person would make when selecting a Benelli Lupo would be which caliber.