Ruger’s Anything But Standard M77 Hawkeye in 243 Winchester and the solitary hunter... 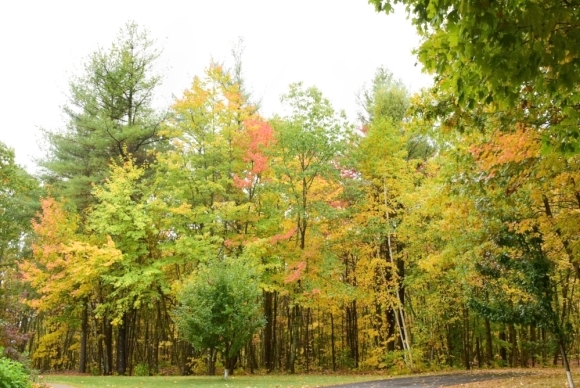 With the area flooded with tourists in search of New England fall foliage; cars, boats and planes Mainers have their own favorite spot to view the same. Mine is the view from my front porch. This is a great time of year for firearm enthusiasts, hunters… and everyone else. Still lots of work to be done before the snow comes, but it is always good to take the time to smell the maple, birch and oak trees cause it is way too late for the roses.

The Ruger Hawkeye Standard for the solitary hunter…

The Ruger Model 77 Hawkeye® Standard is one of the few firearms that is not sold with celebrity, or made into a fashion statement or pulled along with faux military imagery. It is simply a traditional hunting rifle. The rifle’s assembly is a time tested marriage of alloy steel and walnut with no trick bedding schemes, no exotic metal finishes and no Picatinny rail to invite the presence of needless accessories.

The Hawkeye has no barrel nut. Headspace and chamber dimensions are the product of precision machining and talented operators holding to close dimensional and quality of finish standards. The Ruger Hawkeye has no plush recoil pad to diminish the recoil experience and it has an internal magazine above a hinged floorplate, rather than a 30 shot detachable magazines intended for folks who take ill considered shots at fleeing game.

The Ruger Model 77 Hawkeye stands in protest of the silliness that is often presented as firearm innovation, described by folks who spend their days collecting feature input at prestigious hunting ranches and industry shows, who never bothers to ask the opinion of a guy who parks his pickup at the side of a rural direct road and hunts public land.

No, the protest isn’t a protest against progress, it is a protest in support of useful progress versus superfluous changes that appeal only to people who buy “new”. The Ruger Model 77 Hawkeye has actually undergone many changes in casting technology, material refinement, heat treating process, computer controlled precision machining, laser etching, wood finishing, and perfection of barrel manufacturing. If there was ever a rifle that could claim understated but extensive evolution, it would be the Ruger Model 77 Hawkeye.

The flat bottom Ruger action is made from a precision casting, precisely machined and through heat treated. It is joined with its American walnut stock at three locations; rear tang, forward of the trigger and through the action’s integral recoil lug. The front fastener is angled forward and supported at the stock with a large cast steel slug that also anchors the floorplate hinge. The barreled action is joined to the stock in a manner that resists independent axis movement without the fasteners’ surfaces beating the stock bedding into inaccuracy. 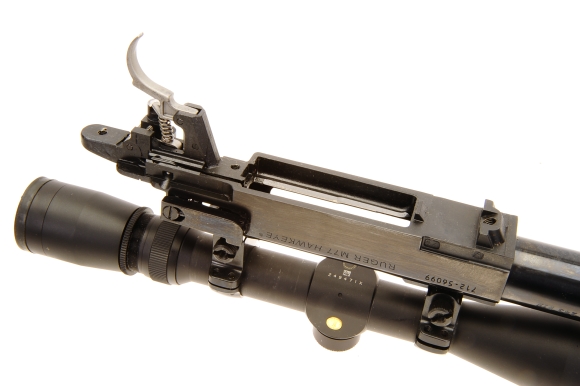 The biggest changes from the prior generation Model 77 to the Hawkeye is a slimmed down stock and a vastly improved trigger in the form of the non-adjustable LC6 trigger with a lighter, cleaner pull. No, I have no idea why this very nice rifle does not have an adjustable trigger. I’d like to think it is a philosophical issue but, as there are other Ruger rifles with adjustable triggers, I would speculate that it could be a production cost or design restriction. It is easy enough for a customer to refine a Hawkeye trigger refine, or have it refined, with a simple spring change or by a local gunsmith with a stoning fixture, but the trigger won’t get in the way as as it leaves the factory.

Difference between a copy and a derivative

Below, top bolt and inset bolt face belongs to the Hawkeye, the lower bolt is a military M24/47 which is Mauser M98 variation. According to Kuhnhausen’s “Mauser Bolt Action Shop Manual M91 Through M98″ the M98 Mauser receiver’s low/medium carbon steel is the equivalent of 1035 and 1036 steel, heat treated to 33C to 35C, typically to a depth of 0.010″ to 0.015″. The modern Ruger utilizes 4140 alloy steel for actions and barrels and a stainless steel bolt, all through hardened for strength and reliability. 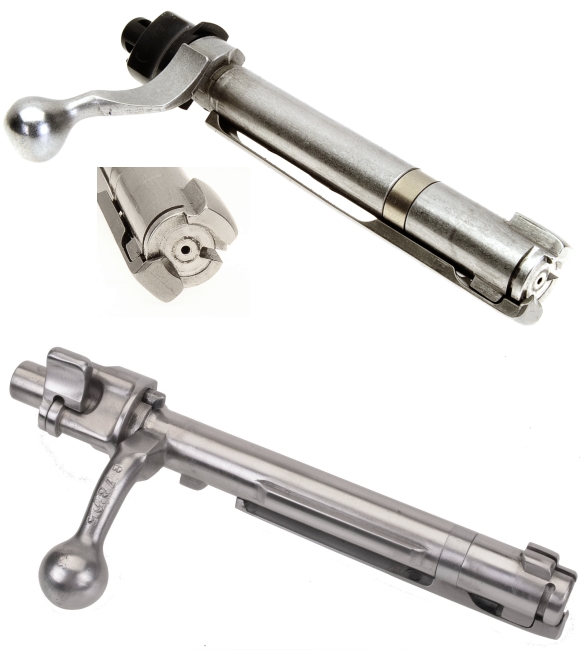 Both Mauser and Ruger retain a fix blade ejection system, no spring loaded plunger, which means fewer parts and more predictability and control over where spent casings land. However, the Mauser ejector passes through and weakens its top bolt lug, while the Ruger design relocates the ejector slot to the bolt body and extends the length of its top lug for greater strength. The Ruger three position safety assembly is located on the receiver, rather than hanging off the back as part of the bolt shroud and it is easy to thumb into position without breaking hold.

Both the Ruger and Mauser are controlled round feed and have non-rotating extractors. Both pick up a round from a magazine and feed and hold a cartridge at its rim and extractor groove. The Mauser bolt travels over some rough road, the Ruger travel is slick without the classic Mauser waggle. Both are 90° lift compared to multi-lug bolt guns that have closer to 60° lift. Theoretically, the reduced lift means faster bolt cycling and greater bolt clearance to permit lower scope mounting. In reality, the lower lift speed benefit is zip as most scope’s with big eyepieces also have large objective bells and defy low mounting. 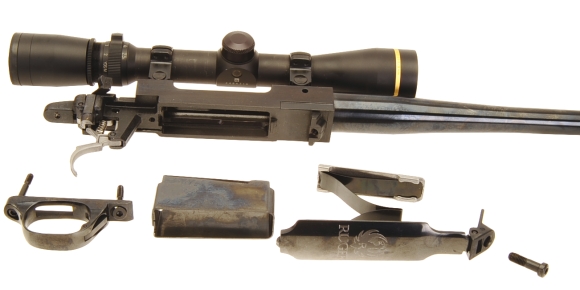 Action and bottom metal that are the makings for a stock sandwich are all steel. No polymer or aluminum pieces creeping to cheapen the appearance of the rifle.

The Ruger stock is precision machined from stable wood. The inletting in the stock perfectly matches the outline of the receiver, with each contour providing bearing surfaces. No pillar bedding, no glass bedding, no v blocks required.

The bottom metal is flush with no sharp edges. The floorplate release, recessed into the front of the trigger guard, is positive in operation and out of the way. The internal magazine holds four rounds and can be emptied by cycling the action with the safety on, or by releasing the floorplate and dumping the contents.

Personally, it don’t care for detachable magazines on hunting rifles. I don’t swap ammo types while hunting, I don’t want to have problems with worn or malformed magazine feed lips and if I need to swap magazines, because I shot through the first without stopping my target, I probably need to go home immediately and take up Bog Snorkeling.

I have no more pictures or words to offer. There are no stacks of recoil pad spacers to alter pull length, there are no adjusters to alter comb height or cast, there are no bipods to fold out of the forearm, there are no rails, there are no gas systems, no threaded muzzle, and there is no way to take down the Hawkeye to half its length without the assistance of a metal cutting band saw. It is just taken out of the box, cleaned, scoped and sighted in and shot, range or hunting. Shall we move on to the 243 Winchester? Thank you. Right this way…

The bolt action rifle and 243 Winchester are my old friends

A bolt action rifle, in 243 Winchester, reminds me of six hours of tracking a deer through half a foot of snow, across steep, wooded mountainous terrain, with temperatures that burn through gloves and parka, redden the face and tax hunter determination. A tracking effort that ends with the smell of blood, bile and pine needles in the air and hide yielding to the sharp blade of an old Buck folding knife. Still have that knife, but the game has long gone to steaks and roasts and sausage and burgers. Now I’m hungry.

A bolt action 243 Winchester reminds me working public hunting areas, following marked up maps and being out for a day or two on my own. A relatively straight forward process; find a deer, kill the deer, field dress it, and get it back to the vehicle. I have hunted with other people, but the process was to synchronize plans, then split up and head out for the day. If you got your deer early, and you were fortunate enough to have keys for the vehicle, you could take a nap while waiting for the others to return. If someone didn’t get a deer, we shared our collective kills and usually got together soon after as families to enjoy the results of the day.

Yes, I realize I used the word “kill” a lot, primarily because we killed our deer and reserved the use of the word “harvest” for crops. I’ve never thanked an animal for giving its life, because I never encountered one that did so voluntarily, but I have sworn at quite a few, if only under my breath. Never sat around a campfire sharing tips on hair products or new camo designs or eating beans for that matter. The only time I ever spent the entire day with another hunter was during my eldest son’s first hunt, he was twelve, and when I hunted with my wife, because… we’ll, she’s my honey and I enjoy her company. Are we going somewhere with this, Joe? Sure. Why not? I got side tracked… Sorry. I’m old. 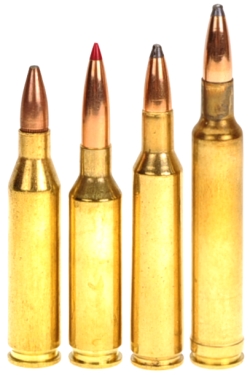 There are numerous 6mm cartridges, L-R. The 243 Winchester, child to the 308 Winchester, is the most popular. It is clearly up to taking deer size game on the big end and varmints and small game on the other. There is a ton of inexpensive factory ammunition and a myriad of firearms chambered for this cartridge and two and one half tons of very current handload data.

The 6mm Creedmoor is a wonderful new cartridge that offers no better ballistics than the 243 Winchester, is available in a limited number of firearms and in only a few factory loads. It does, however, give marketing types new blah, blah to blah, blah about.

The 244 Remington does offer a velocity edge over the 243 Winchester, but not enough to take significantly larger game to stretch much further. Factory ammunition choices are few and rifle choices are fewer. It is a great cartridge for folks who like to take the hard way to get some place and do their own facial tattooing with burning charcoal and pointed sticks.

The 240 Weatherby… mostly has a belt, double radius neck and produces slightly more than 244 Remington velocity. If you like overpriced firearms and ammunition and associating with pretentious people, the 240 Weatherby is definitely the way to go (see “sharing tips on hair products or new camo designs”. A little disingenuous on may part as I did a review of a 240 Weatherby and Mark V and enjoyed the hell out of it, but it would not be a personal choice.

So how well does a moderately price, traditional sporter shoot? 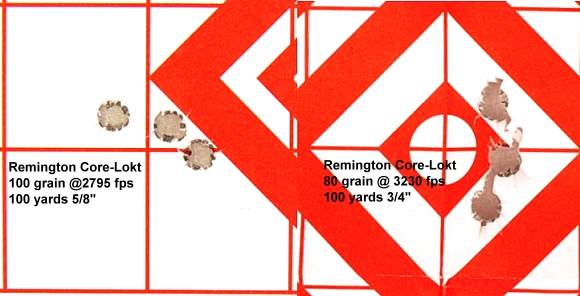 The planned Part II has a handload focus for this rifle and the 243 Winchester, but I wanted to conclude with some factory ammunition to establish a baseline and to set performance expectations. Muzzle velocity recorded was 165 fps below the ammunition’s 24″ test barrel rating. The 80 grain ammo fell only 20 fps under the ammunition’s 24″ barrel rating. Not bad for $19.95/box. 100 grain ammo is suitable for deer, hogs and black bear and 80 grain ammo is suitable for small game and varmints.

What I like about the Ruger Model 77 Hawkeye is the straight forward approach to a hunting rifle and its excellent out of the box accuracy. It is put together to last with heavy use and only routine maintenance. What I would like to see? King Kong fighting a brown bear of similar scale and more days of hunting.